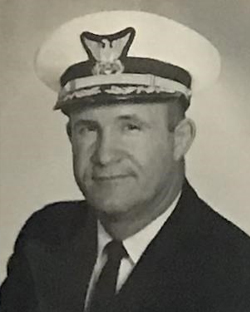 Jim was born October 8, 1933 in Albuquerque, New Mexico. He was very proud of the fact that he was named after a Detective Series by the name Jimmie Dale/The Grey Seal, which is a fictional character who had a costume and mask for his secret identity, serving as a possible influence for characters later such as Zorro and The Shadow. The series was created by Frank L. Packard in 1914. His Mother was an avid reader. She chose his name right since he loved to read books, especially his comic books. He would often read the adventures of Sherlock Holmes and Tarzan. You name it. He read it. Even his Math books would be read like novels.

At the age of 9 he had traveled all over the West with his parents as they would try to find work after The Depression. He had attended 14 different schools before the 4th grade. When they moved to Indio, California that is where his Father brought the first bakery to the Valley at that time. Something that he was so proud of. They stayed there until he graduated from High School.

In 1951 he graduated from Coachella Valley High School. He was accepted at both the Naval Academy and the USCG Academy. It is amazing that he had never been on a boat before he chose the career he did. But he never complained of seasickness, even though he would get it.

He was Captain of the wrestling team, and the undefeated football team. Upon graduation at the USCG Class of 1955, he was recipient of the Math Award Regular Vets Association.

While stationed in Boston, in 1955 he met Jane Ruth Lewis of Uxbridge, MA. On November 10, 1956, they were married in her hometown with a military wedding, complete with his military sword that his Grandmother had bought for him while at the Academy. His children followed after. Cindy was born in Everett, MA, Jimmie Jr. born in Wilmington, NC and Timmie born in New London, CT. His greatest joys in life was his family. In his spare time he was also a Scout Master in San Juan PR and later years for his sons. He was also involved in the Wrestling Federation of America, since his sons were also wrestlers. I swear he never slept to get all these achievements done. The only achievement that wasn’t obtainable was that he couldn’t teach his own daughter Math. Just wasn’t in the cards.

He got his third chance in life at maintaining his youth and that was though his grandchildren. He had a beautiful smile and laugh- but you knew he was truly happy by the twinkle in his eyes.

He served on the USCG Duane, USCG Mendoza, and Search and Rescue in San Juan, PR. Then to the USCG Academy for 19 years. A total of 35 years in the USCG. Many summers were spent sailing on the USCG Eagle. Other times he was invited to spend as visiting professor or attending seminars at College and Universities around the country.

At the Academy, Jim served on the permanent commissioned teaching staff, he was the Head of the Mathematics Department until retiring on December 31, 1980 and earned his Masters from Trinity College in Hartford, then his PHD from the University of Connecticut. He would say the degrees he worked the hardest on were the smallest, and those he was most proud of.

While stationed at the Academy he was project manager to bring back the remains of the 1st USCG Officer, Hopley Yeaton, to be permanently buried in the chapel yard. He also was behind getting the first computer programmed at the USCG in between getting his Masters.

He was always delighted to be involved with the Coast Guard, accepting a position of permanent professor. His comment was: ” My job is important, I am going to teach the Coast Guard Math” He was proud of that. He taught many, handing out awards at special ceremonies and especially keeping in touch with his many students that had gone on to become Admirals and even a Commandant of the USCG.

Along with reading and seeing on TV about all the rescue work that they still do. He was proud of the decision he had made to go into the USCG in 1951.Upon retiring he taught at the Hartford Graduate Center as a full professor until 1989, then 1990 he became Dean, School of Management of the Hartford Graduate Center. During his teaching career he wrote many Math Books that were used for many years at both schools he taught at. In 1999 he was voted to become Professor Emeritus at the Coast Guard Academy.

His wish when he decided to retire was to go home to the Valley where he grew up. He had vacationed there part time and then built his retirement home in 1985.

He was active in The Military Officers Association, Member of the La Quinta Golf Estates homeowners Association board for over 20 years, Masonic Lodge 476, Royal Arch and Order of the Eastern Star 360.

He loved working/ judging Artwork, selling tickets and meeting a lot of his old High School friends at The Riverside County Fair and National Date Festival in Indio, California. This was his home.

His awards were many in his lifetime, but these are the ones that he was most proud of: National Science Faculty fellow 1964-1965, member American Statistical Association, American Mathematics Association, Operations Research Society Quality Control, Phi Kappa Phi. Listed in Who’s Who in America in the East.

He is survived by the love of his life, his wife of 63 years, 8 months, 12 days, (23265 days), Jane. His favorite quote to her was : “Grow old along with me! The best is yet to be…” A man of his words he always was, and he always kept his promise to her with their time together.

Interment of ashes will be at Riverside National Cemetery, Riverside, Ca. with full military honors on September 8th, 2020.

In lieu of flowers, the family requests that you reach out to someone who is also experiencing the long road of Alzheimer’s to show them comfort and support. And remind them how much they are loved and how important they are and were.

Open a book of adventures to the young- help them with their studies if they aren’t doing well in school-turn on a old time movie- or just play Hansel and Gretel. But remember to love, laugh and just enjoy your life! For we are all the teachers of the future. A forever we don’t have but a piece of us we will always leave with whoever we may teach along the way.