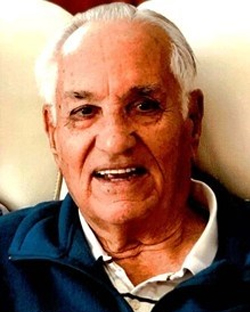 Jno Germain Visbal, age 91, went to meet his Lord on October 18, 2021. Jno was born in Honolulu, HI, on August 18, 1930 to Germain Antonio Visbal and Ruth Waters Visbal. He spent much of his life volunteering to help others. He first volunteered and joined the U.S. Air Force in January 1951. He served for 30 years in both active and reserve duty. His first assignment was during the Korean War. He performed aircraft maintenance in Long Beach and then transferred to Japan to support fighter missions to North Korea. In the 1960’s he was assigned missions to Vietnam from Feb. 1964 until 1990 when he served as a flight engineer on the C-119, C-124 and C-141 airplanes. He flew in and out of Hanoi, Vietnam and many other places. Each flight was unique. Once he helped repatriate 20 MIAs. Another time he went on an aero-vac mission for a medical recovery in Antarctica. During his reserve time he also worked a civilian job with Detachment 6 at Norton AFB, CA. He was an equipment specialist on the SR-71 spy aircraft specializing in the seat ejection system and the pilots’ pressure suits. The program ended shortly after his retirement. Retirement began in 1990 but he didn’t retire. Jno and his wife Betty volunteered and served with the Red Cross for the next 16 years. They drove an emergency vehicle to the sites of many hurricanes, fires and floods. He was awarded many commendations. Volunteering didn’t end with the Red Cross. He continued giving 23 years of volunteer time to the neighborhood community as a board member and welcome face. He was the go-to person when a community problem came up. His door was always open. One final note: Jno knew how to work hard but he enjoyed his life. He found time to relax in Hawaii which became a home away from home. He enjoyed classic cars and paraded a Model-T and a 1956 T-bird. He shared his travel time in an RV or cruise ship with family and friends. He loved ice cream. He knew how to live and had a wonderful life. Jno is survived by his wife Betty of 69 years, his daughters, Beth Kindt (Carlos), Diana Hamil, and Melinda Wright (Bob), eight grandchildren, ten great-grandchildren and two great-greats. He also has a brother, Guy Visbal (Joann). He was preceeded in death by is daughter Darlene and brother Leo. Jno was a devoted husband, father, grandfather and friend. His expertise in so many fields, his willingness to serve and his never ending quest to travel define his life. He is missed by all who knew him.