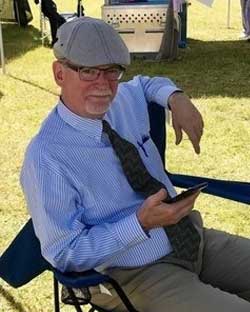 January 1954 – July 2021 Joseph Allen Perine, age 67, passed away July 28, 2021. Joe lived life to the fullest and had just completed two marvelous trips with friends and dogs when he began showing symptoms of what would be diagnosed as advanced metastatic esophageal cancer. Joe passed at home less than a week from starting chemotherapy, in the arms of his beloved. Joe was born at Edwards Air Force Base in 1954. He married his soul mate, Dawn Gordon-Perine on March 12, 1988. Joe is survived by his loving mother, Doris Faulring and his younger brother Howard Vincent Perine. He was preceded in death by his sister Linda Perine and his father James Howard Perine. Joe and Dawn shared their home with their adorable dachshunds, Darby, Skye, Lenny and Keeva. Joe joined the Air Force in March 1974. After basic training Joe was stationed at Norton Air Force Base where he stayed until he left the air force in 1979. He went to work for TRW in 1981. Joe graduated from CSUSB in 1985 with a BA in Business Management. Joe continued to work for TRW through the acquisition by Northrop Grumman in 2002 and ultimately retired from Northrop Grumman in 2015. Joe was a voracious reader and student of history. Everywhere he went was a chance to explore another historical moment. He embraced adventure and reveled in each new landscape with Dawn and his dachshunds by his side. Joe loved traveling, golfing, surfing, fishing, diving, hiking, and competing in canine field trials and K9 nose work. He had a love/hate relationship with running but never stopped running with his wife Dawn. He tried skydiving, whitewater rafting, and zip lining and loved it all. Joe cherished his role as community representative on the Loma Linda University Hospital Ethics Committee. He was also one of the most friendly and familiar faces volunteering at K9 events. No matter what Joe was doing everyone remembered him as a friend.