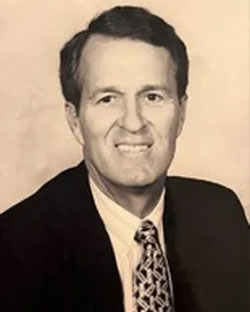 Born November 4, 1948 and passing on Veteran’s Day this year, Joe Wessel lived a life dedicated to his love for his family, his commitment to his clients and ideals, and his passion for sports.

Raised in Cleveland, Ohio by his parents Joseph and Sandra Wessel, Joe grew up with three brothers and two sisters, playing basketball and caddying frequently at the local golf club.

After high school, Joe attended University of Cincinnati, then worked as an insurance adjuster before joining the Air Force in 1972. During Vietnam, Joe was on flight crew for the C130, followed by 14 years as a ‘back-seater’ in the F4. In 1977, while stationed in Spain, Joe met Pam, the love of his life, wife of 44 years, and the mother of his two children.

Earning ‘Top Gun’ honors at George AFB and rising to the rank of captain in his 20 year military career, Joe loved flying, playing golf and tennis, and traveling with his family. During this time, Joe also earned his MBA.

After retiring from the military, Joe began a 30+ year career as an investment advisor, working for Edward Jones for 17 of those years, but always, first and foremost, for his clients. Integrity, reliability, and loyalty were not just words to Joe; they were the code by which he lived.

Never one to take it easy, Joe could always be found in recent years maintaining his yard, biking long distances, talking to anyone and everyone, watching or betting on sports, and tracking the market. He continued to travel the world with Pam, celebrating their wedding anniversary with a trip to Greece this August and a planned birthday cruise to Mexico.

Most of all, Joe loved spending time with his family, especially his grandchildren. He is survived by Pam, his daughter Christie, his son-in-law Sean, and his grandsons Ronin and Aidan, as well as his beloved son James and granddaughters Arielle and Jade. Joe will be missed by many, including his sisters, brothers, and daughter-in-law, Abril.