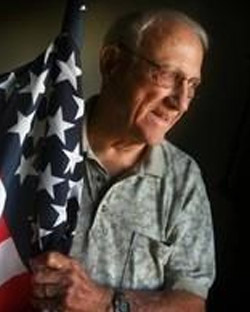 John Albert Ballard was born Dec. 24, 1920 and passed into eternal life Oct. 1, 2021 at his home in Hemet, CA. He grew up in Wood Lake, Nebraska with 14 siblings on a large cattle ranch. John joined the U.S. Navy at the age of 20 becoming a hospital corpsman and medic on the USS Foote. Soon after, it was hit by a Kamikaze and a missile in Pearl Harbor, December 7, 1941. After the war he met and married his first wife, June Banks, who was an officer, RN, and Navy Wave. They had 2 children, Mary Ann Ballard Edmundson and John Elwin. John moved his family to Hemet, CA in 1964 when he began working for the DMV. He enjoyed good food, playing tennis, traveling in his RV, telling jokes, playing poker, making furniture in his wood shop and spending time with friends and family. A few years after June’s death, he met his 2nd wife, Gloria Truttman. John and Gloria lived happily together for more than 16 years, enjoying a fun and joyful marriage. He loved Gloria’s family like his own. John was preceded in death by his parents, Catherine (Cassie) and William (Billy) Ballard, his son, John Elwin Ballard, and first wife, June Caroline Banks Ballard. He will be greatly missed.