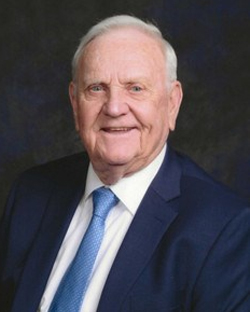 On Tuesday, March 1, 2022, John Jefferies Burri, of Alta Loma, CA, passed away peacefully at the age of 86, with his 5 children by his side. John was born November 19, 1935, in St. Joseph, Missouri to Jeffries R. Burri and Mary Burri (Pawlowski). John graduated from Christian Brothers Catholic High School, then enlisted in the Marine Corps in 1954, and was honorably discharged in 1956, with the rank of sergeant. He earned degrees in engineering and mathematics at Pasadena City and St. Joseph City Colleges. Upon his city college education, he met, courted, and married his beloved wife Joan (Durocher) in Holyoke, Mass. They then moved out West to start their life together landing in California, their joyous marriage of 53 years was blessed with 5 children and ended only with Joan’s passing a few years ago. He continued his studies at CSLA, and during his senior year he had accepted a job offer at Western Air to begin his career as a Mechanical Engineer. After 20 years, he ventured out to start Pacific Air Systems and after 7 successful years he merged with Air Mechanical, where he remained until his retirement. John was preceded in death by his parents, wife Joan, and sisters Connie and Helen. He is survived by sisters Patty and Jane, and brother Jeff. He was a loving father to daughters Robin (Boyett) and Sandy (Clark) and sons Chris, John, and Brady. John’s life was further enriched by the successive addition of 5 grandchildren and 7 great-grandchildren, and all are mourning his passing. In addition to his love of family, he was a devout Catholic, taking great pride in becoming a eucharist minister, his faith deeply influenced his everyday life and was involved numerous charities to further the Faith. Besides his love of dancing, John was also passionate about the game of golf, from his youth as a caddy, playing with his fellow Marine Corps golf group, to the days of the “Raiders” golf group at Corona National, to the “Burri” group at Sierra La Verne. John’s most prestigious achievement was winning the 2001 SCGA Super Senior Amateur Championship, not to be outdone by the nine holes-in-one during his lifetime. He was a “scratch” player, a teacher and always a reliable partner, but most of all, a tremendous mentor to everyone who knew him, not only for the game of golf, but in every aspect of life. John’s personal warmth, his sense of humor and his kindness to all gave him many lifelong friends. We will all cherish the times we had with him and know that he’s looking down on us and saying “hit ’em straight partner!!” Semper Fi!!