Written by Night For Vets on June 9, 2020. Posted in Gone But Not Forgotten 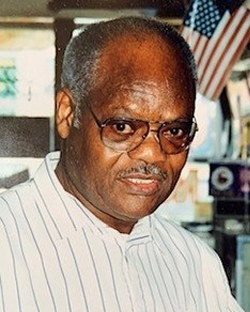 John Willie Butler, Jr., departed this life on Sunday morning, May 10, 2020 at his home in San Bernardino, CA following a lengthy illness. John was born in Plymouth Township, PA on August 13, 1933 to the late John Willie Butler Sr. and Josephine Butler. He attended the Norristown, PA School District. John, a former employee of the Philadelphia Textile Finishers, Inc. was inducted into the U.S. Navy at Philadelphia for a two-year term. In his youth, John was a talented amateur boxer classified in the light heavyweight division. John was united in matrimony to Mary Louise Janifer and from this union was born daughter Michelle Denise. John was an extrovert with a quick sense of humor. He enjoyed conversations with family and friends and loved a good party. John was an avid fisherman and also spent many enjoyable hours gardening. He previously served as an usher in his church, St. Anthony. John was a Knight of Columbus in San Bernardino, having served in the capacity of Grand Knight. John retired from San Bernardino County after 27 years employed in facilities management. John is survived by his wife, Mary of CA; his daughter, Michelle Denise of CA; brothers Edward Butler of CA, Robert Butler of WA, Emanuel Butler of CA, and sisters Jennifer Hulsey of ME, and Deborah Butler of GA. John was predeceased by two brothers, Benjamin, of PA and Omar I. Shamsid-Deen of CA, and an older sister, Mary Ward of PA.