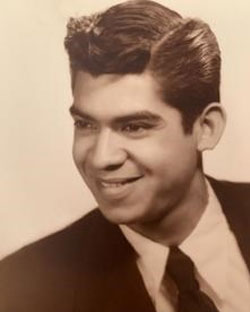 John (Johnny) Jacinto Dahlberg May 5, 1937 – January 12, 2021 John (Johnny) Jacinto Dahlberg, 83, peacefully entered into rest on January 12, 2021, at his home in Yucaipa, CA following a seven-month battle against pancreatic cancer. John was born in Redlands, CA on May 5, 1937. John is survived by his wife, Beverly Dahlberg and his three children: daughter, Tracy Marie Gossert (Burnie), and sons John Christopher Dahlberg (Linda) and David Anthony Dahlberg (Nicky). John has 12 grandchildren and eight great-grandchildren. He is also survived by his three sisters: Dr. Karen Wynn (Paul), Pamela Krause (Clay), and Patricia Brock (John). He also leaves 3 stepchildren: Jeannie Farley, Jamie Lund (Mark), and Rick Leonard. He was predeceased by his parents Harris and Ramona Dahlberg, and his daughter Kimberly Joy Carvalho. John was the oldest of three living descendants of Jacinto H. and Concepcion Romero who were the superintendents of the historical Fairbanks Ranch which was located on Bryn Mawr and Highway 99. John served in the Army and received an honorable discharge for his service. John, a Redlands native, graduated from Redlands High School in 1955 and attended San Bernardino Valley College. He worked in various retail capacities at Sage’s, Standard Brands and RB Furniture until he became owner/operator of the Rain Barrel Plant Boutique and the Railroader Restaurant. John loved growing up and living in Redlands. His sisters remember the many times they would be out in town and there would almost always be a “Hey, John!” from one of his many friends. We love you and miss you John. You will always be in our hearts.