Written by Night For Vets on September 24, 2020. Posted in Gone But Not Forgotten 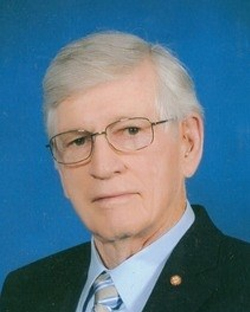 Age 87, of Apple Valley, CA, passed away on August 26, 2020. He was born in Southgate, CA on October 23, 1932 to the proud parents Elmer Rees and Helen Louise Easley. John grew up in Long Beach, CA then spent time in the North San Diego area ultimately moving to the Hermosillo/Guaymas area, Sonora, Mexico where he attended Colegio Regis- La Salle Hermosillo. At the age of 18, John enlisted in the United States Marine Corps where he spent most of his time fighting in the Korean War. In 1953, when John returned from Korea, he met the love of his life, Carol Chantler at a USO dance in Orange County, CA. John and Carol were married on January 30, 1954 at St. Joseph’s Catholic Church, Santa Ana, CA. John worked various jobs before embarking on a long career with the Santa Fe Railway Co. in 1957. During his career, he transitioned to the United Transportation Union rising to the position of Vice President, Western Territory. On January 1, 1996, John retired after 39 years of Railroad/Union service to pursue hobbies such as worldwide traveling, trading stocks, reading books and playing poker. He was an active member of the Marine’s Memorial Club, San Francisco, CA and the Apple Valley Seniors Citizens Club. John is survived by his two sons, Jeffrey (Alice) Easley of Running Springs and William (Vickie) Easley of Hesperia, 5 grandchildren, 6 great grandchildren, 2 brothers-in-law and 1 sister-in-law. He was preceded in death by his parents Elmer Rees and Helen Louise Easley, his wife of 57 years, Carol Elizabeth Easley, his sister Mary Louise Jones and his brother James Elmer Easley.