Written by Night For Vets on November 25, 2019. Posted in Gone But Not Forgotten 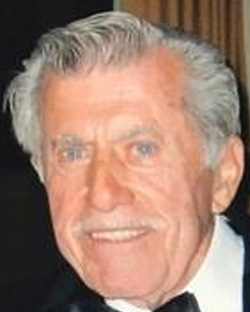 John (Jack) Flanagan Nov. 26, 1931 – Sept. 13, 2019 Jack passed away on September 13, 2019 in Menifee at 87 years young. He was reunited in Heaven with his wife Freda (Shannon) of 56 years and their daughter Darlene (Rounds). Born in Boston, MA, to Luke and Helen Flanagan. He served in the U.S. Marines and later had a career as an Engineer in the Aerospace Industry. He was proud to be part of the Apollo 17 and Skylab teams at Cape Canaveral, FL. After retiring from Northrop Grumman, Jack and Freda built their dream home in Lake Havasu City, AZ. Years later returning to California and settling in Menifee. Jack said he was lucky to have found true love in his life. When Freda passed in 2012, he didn’t feel he could live without her. Through a bereavement group he met Henriette; his second true love. A match blessed by his family. Survived by his love Henriette Giasson, daughters Coleen Hubbell (Dave), Marlene Friedman (John), grandchildren Jeremy (Nikki) and Cody Lovejoy, McKenna and Aaron Friedman, great-grandchildren Ava Lovejoy, twins Demi and namesake Jack Lovejoy and sister Honey DeWolf.