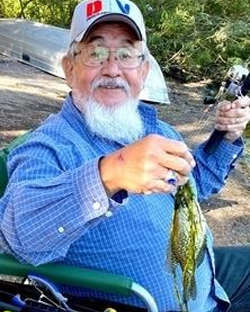 July 16, 1946 – July 6, 2021 John Hernandez, 74, went to be with the Lord on Tuesday, July 6, 2021 in Victorville, California from Liver Disease. He was born in Fort Stockton, Texas on July 16, 1946 to parents Conrado and Lucille Hernandez. John joins his wife in Heaven, Gradie Lee, of nearly 48 years of marriage, who passed away March 30, 2018. He leaves his daughter Andrea Isaac and her husband Jason, son Johnathan Hernandez, granddaughters Arianna and Jennya Isaac, and June Hernandez. He is also survived by his mother-in-law and family, Gradie Gribble, Danny Bond, Linda Gonzales, John Bond, and Kathy Stanley. John and Gradie met in 1968 at Middle Tennessee State University (MTSU) on a blind date. They married in Murfreesboro, Tennessee on June 4, 1970 at St. Rose of Lima. They were blessed with two children. Andrea was born August 1, 1975, and Johnathan on December 14, 1976. They have three wonderful granddaughters, ages 21, 18, and 15 years old. John joined the United States Air Force on August 4, 1965 as an aircraft Electronic Repairman for the C-7A Caribou at Sewart AFB in Smyrna, TN. He was honorably discharged on August 3, 1971 as an E-4 Sergeant. He earned his Bachelor of Science in Psychology/Sociology from MTSU in 1974 and a Clear Teaching Credential from California Baptist University (CBU), Riverside in 1985. He also completed his Master of Science in Educational Administration from California State University, San Bernardino (CSUSB) in 2005. John was honored to have over 30 years of teaching experience, including advocate schools/special needs, and English language learners. He retired from Norte Vista High School in Riverside, CA with teaching nearly 25 years of Special Education. He kept busy by spending time with family and friends, traveling with his wife, and visiting family across the United States. He enjoyed going to the Old Time Religion Church in Riverside with his wife. John was an avid reader, loved fishing, and appreciated his music. He was also a member of the California Retired Teachers Association (CalRTA), Disabled American Veterans (DAV), American Legion, and Knights of Columbus (KOC).