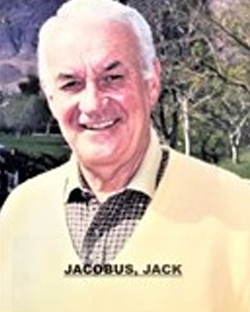 John Thomas “Jack” Jacobus passed away on December 18, 2019, after a short illness. Born on Sept. 7, 1935, Jack was the son of the late Harriett Godfrey Jacobus and Delwin Charles Jacobus of Wauwatosa, WI.

Jack was a proud alumnus of the University of Wisconsin-Madison where he graduated with a BA in Economics of Finance and Real Estate. It was at Madison that he met his sweetheart and bride, Suzanne Sullivan of Cleveland, OH. After graduation Jack and Sue married and moved to Washington, D.C. where Jack served as a second lieutenant in the Army at Fort Belvoir, and Sue gave birth to their first child, John.

Following his military service, Jack and Sue returned to the Milwaukee area where Julie, Steve and Jennifer were all born. The family made Elm Grove their home for nearly 60 years.

Jack spent his career as owner and President of The Olson Companies; a trucking, truck leasing and multi-state warehousing and distribution company, and Mid-City Lumber and Supply, located in Wauwatosa.

In his professional career, Jack had the honor of serving as the President of the Wisconsin chapter of the American Trucking Association and was on the national board of the ATA, and served as board chair of the Wisconsin Chapter of Young Presidents Organization (YPO). Jack enjoyed serving on numerous civic boards including the Salvation Army and the Kidney Foundation of Wisconsin, and as a board member of Mount Mary College. He was a member of The Reserve and The Springs Country Clubs.

Anyone who knew Jack would describe him as truly one of the nicest, kindest guys you’d ever meet. You knew he was always happy to see you, and you’d be hard pressed to ever hear a story of Jack in a sour or angry mood. His sons and sons-in-law remember the joy and energy he had while playing golf—especially while he was showing them a thing or two about the game on the course. The same could be said of his beloved Packers and Badgers. He always added a few points to the line (in his favor) when making family bets on rivalry games. His family will always remember what they called his “movie theatre laugh,” because he could get an entire theatre chuckling in response to his deep, infectious belly laugh.

Jack dearly loved his eight grand children, and was passionate about sharing his love for summer camp in Northern Wisconsin with them. All the grandkids have wonderful ‘Up North’ camp memories, and he was so proud that all five grandsons carried on the Jacobus men legacy at Red Arrow Camp (RAC). Jack loved to visit his grandchildren at camp during the summer, where he was reminded of his childhood summers on Trout Lake.

As much as every one of his children and grandchildren felt unconditional love from Jack, his greatest love was always for Sue. Together, they kept the romance alive for 61 years with date nights, Sunday afternoon golf games and winters in Palm Desert, CA.

Amidst the sorrow of his passing, his family has comfort knowing that Jack and Sue’s oldest child John was waiting to greet Jack as he transitioned into God’s loving arms.

Jack is survived by his wife Suzanne, his children; Julie Eiselt (Tom) of Charlotte, North Carolina, Steve Jacobus (Erika) of Nosara, Costa Rica and of Milwaukee, Wisconsin, and Jennifer Corona (Paul) of Glen Ellen, Illinois. Jack is also remembered by his grandchildren; Jack, Joseph and Katharine Eiselt, Ryan, Michael and William Jacobus and Daniella Brandt, and Elizabeth and Margaret Corona, his brother; Richard Jacobus (Carolyn) of River Hills, Wisconsin, and his sister Susanna Souder of Gulf Stream, Florida, as well as many nieces and nephews. In addition To his son, John, he is predeceased by his parents Delwin and Harriett, and his brother Chuck.