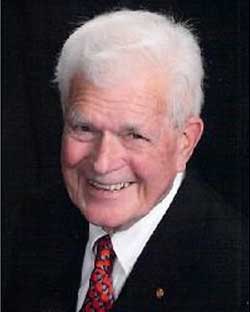 John W. Jones (Jack) went home to be with the Lord on July 15 at the age of 88. He died peacefully surrounded by his loving family. Jack was the son of Guy and Mildred Jones of Fairfield, Iowa. Jack grew up in Fairfield, joined the Seabees (U.S. Navy) and served four years in Newfoundland and Cuba. He married the love of his life Peg Hininger in 1952 and they were married for 67 years. Jack graduated from the University of Iowa with a degree in journalism. After graduation, he moved his family to California in 1958. He worked at the Merced Sun-Star, Bakersfield Californian and The Press Enterprise until his retirement. Jack’s passion was fishing, caring for the less fortunate and tutoring non-English adults. He loved attending his grandchildren’s and great-grandchildren’s baseball games, concerts and other activities. In later years, his activities included Bible studies, a movie group and church. Jack was deeply devoted to his Christian faith and greeted all whether friend or stranger with “Happy and blessed” and “Joy to you.” Jack is survived by his loving wife Peg; two children, Jeff Jones and wife Betty, and Cindy Grande and husband Tom; six grandchildren; nine great-grandchildren; sister Mary Leech; and a College-Career Group.