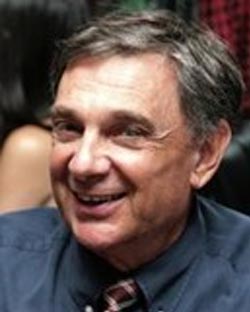 John was born in Stamford, Connecticut to parents John Peter Kaptain, Sr. and Edith Ann Kaptain (nee Genovese). Along with his sister, Donna, he grew up in nearby Darien. Nicknamed "Non" by his adoring family, he enjoyed an idyllic childhood that included sailing on the Long Island Sound. He carried those childhood experiences with him throughout his life, occasionally reminding other loved ones throughout the years, "The sea is my life!"

John attended Colgate University in Hamilton, New York, where he was a member of the Delta Kappa Epsilon fraternity. His years at Colgate were filled with fun times with his fraternity brothers, watching collegiate hockey games, taking spring break trips to Nassau, and going to the horse races.

John graduated in 1966 with a Bachelor Degree in Fine Arts. During the Vietnam War, John joined the U.S. Air Force. He served at Elmendorf Air Force Base in Alaska, and as a member of the 357th Tactical Fighter Squadron at Takhli Royal Air Force Base in Thailand. He earned the rank of Captain while serving his country. When he returned stateside in 1971, John was stationed at George Air Force Base in Victorville, California, where he met Nancy Hubin at a mixer for members of the military base and local teachers. They soon married and traveled through Europe on their honeymoon. The newlyweds relocated to Riverside, where they had twin boys: Jeffrey and David. The young family enjoyed taking many trips all over the country — camping, river rafting, exploring Yosemite, taking in the culture and food of New Orleans, absorbing the historical significance of Williamsburg, and many more. All the while, John was the most engaged, supportive father, who took joy and pride in coaching the boys through youth soccer, and attending nearly all their swimming and water polo events during their high school years.

After his discharge from the military, John enjoyed a long and successful career in education. He attended Cal State University San Bernardino to expand his fine arts skills to include ceramics and woodworking, and to receive his Teaching Credential. He was first hired as a teacher in the Fontana Unified School District to teach Educationally Handicapped students at Alder Junior High School in the fall of 1972. He ultimately obtained his Master’s Degree and Administrative Credential, and was promoted to the District Office where he worked as District Resource Teacher and Staff Development Specialist. John also served as a trainer for the California State Leadership Academy. He was tapped to open Almeria Middle School as Assistant Principal, and then moved on to serve as principal of Shadow Hills Elementary School. Shadow Hills was particularly rewarding for John — he always referred to it as "The Happiest Place on Earth," and that was absolutely verifiable by students, parents, and staff! After opening Jurupa Hills Middle School and Chaparral Elementary School, John became Director of Middle Schools and later took on the Directorship of Educational Accountability.

He retired in 2004, after which he spent a lot of time cycling, golfing, and doing a little running and kayaking. His competitive spirit came through in the numerous triathlons that he competed in as the cyclist and elder statesman for team Kaptain Cubed (Jeffrey did the swimming, David the running). John and the boys won the Family Relay Division in the Escape from Alcatraz and the Carlsbad Triathlon a couple of times! In 2006, John married Pamela Westbrook, his soulmate and the love of his life. They enjoyed traveling to their special places: Cambria, Yountville, and Carmel. But most of all, they loved being home and enjoying their time together and with their family. John was the most supportive and positive Poppy (grandpa) to his amazing grandkids: Madison and Natalie (Jeffrey and his wife Kellie), and Brandon, Devyn, and Kennedy (David and his wife Helen). He would take them to the park, encourage them in bike riding, push them on the swings, play catch or kick balls, and book them swim lessons. John attended many of Madison’s soccer games, and loved watching her skills and talent blossom. His love of hockey filtered down to Brandon, who would give John "the hockey update" after almost every ice hockey game or practice. And John recently flew out to see Brandon play during an intermission at the Colorado Avalanche versus Dallas Stars NHL game. Universally loved, John’s presence will be deeply missed by his family and friends. But his joy for life, boundless warmth, and caring spirit will live endlessly in the hearts of all of those who he touched.