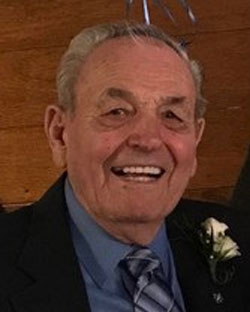 John Matthew Lesondak, Jr. 92 years old John entered heaven December 31, 2020 with his daughter by his side. He was born in Ambridge, PA to John, Sr. and Anna Lesondak. He lived most of his life in Pennsylvania. John joined the Navy and upon discharge in 1947, he joined his family in California. In 1950, he married Norma and they were married 70 years, up until her death in March of 2020. John was preceded in death by his parents, John, Sr. and Anna Lesondak, his wife, Norma, his son, John Matthew Lesondak, III, his 4 younger brothers, Tom, Bob, Bill, Richard and his older sister Betty Cheney. John was a member of Red Hill Country for 44 years. He was an avid golfer and had many friends at the Country Club. He was also a member of the Ontario Elks Club for 62 years. During that time, he met many wonderful friends, including his card buddies, who were so important to him. He spent 20 years traveling with the Breezy Elks as well and had many interesting stories to tell. John traveled numerous places with his wife, Norma, but always said he loved his trips to Spokane the most. He spent several summers on the lake enjoying his family and numerous friends he met. John retired from commercial plumbing at age 57 after serving the area for 35 years. John is survived by his two daughters, Dee Anna Lesondak of Upland and Peggy Eckert of Spokane, WA., granddaughter, Sara Zangenberg (Adam), great-grandchildren, Allyson and Sean who are currently residing in Weiden, Germany. He is also survived by his sister-in-law Madeleine Lesondak and Denise Baeriswyl, as well as many nieces and nephews.