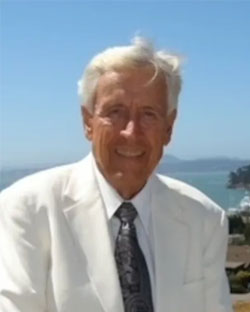 John LeValley IV, M.D. passed away on February 12, 2022 at the age of 92 in Eisenhower Memorial Hospital, Rancho Mirage, California. Splitting his time between Miami, Florida and the Coachella Valley, the past few years were spent primarily in Palm Springs to be closer to his children. His Mid-Century Modern retreat was shown at the 2022 Palm Springs Modernism tour. Growing up in Painted Post, New York, John was the youngest of four siblings and the only son. He won a multitude of accolades and excelled in high school. After completing his undergraduate education at the University of Michigan, he achieved the distinction of Valedictorian of his Medical School at the University of Buffalo. John then chose to enlist in the Army. The Army lead him to Alaska, Kentucky, then California, settling in South Pasadena in 1961. John remained in South Pasadena for 25 years, helping to rear his two daughters. In addition to his private psychiatric practice, John worked as the Medical Director of the Student Health Center at Cal State Los Angeles. John retired early and moved to Florida in 1985 to follow his true love, Janet Allison, Ph.d as she completed her training in the Ph.d-M.D. Program at the University of Miami School of Medicine. John enjoyed being active running and playing tennis regularly at the Towers of Quayside condominium in Miami. He was known there for his often-winning short shot. He remained active until his health began to decline in the last two years. Together for almost forty years, John and Janet travelled the world extensively, often on cruise ships. They enjoyed playing casino games and feasting on the buffets, especially the chocolate desserts. John had an uncanny ability to recall and share a long-remembered joke to fit any occasion. He was intelligent, kind and enjoyed helping others and he loved his family. John is survived by his wife Janet, two daughters Lisa LeValley (and husband John Harmon) of South Pasadena and Nancy LeValley Vos (and husband Doug Vos) of Dana Point, California, as well as grandchildren, McLean Goldwhite and Zachary Vos.