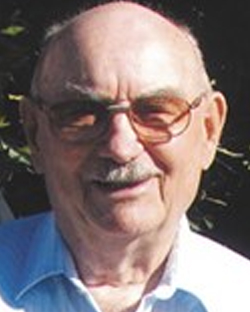 John Nicholas Loncar was born in Goldfield, NV, on April 7, 1922, and died July 30, 2019. He served in the US Navy during WWII aboard the USS Frankford and saw action at Normandy on D-Day. He worked for Southern California Edison for 32 years, most of it as a service crew foreman, but also, as a lineman, primary serviceman and lineman splicer.

He was a Master of Montezuma Lodge #30 in Goldfield, NV; Tonopah Chapter #12 Royal Arch Mason where he attained High Priest; Scottish Rite where he was a charter member of the Las Vegas Lodge.

He was a life member and Past Commander of Kenneth Booth Post 1103 Veterans of Foreign Wars in Tonopah, NV.