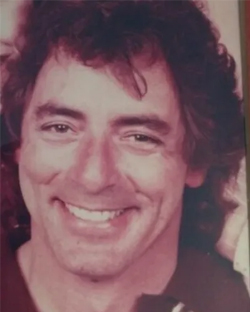 “And Flights of Angels Sing Thee to Thy Rest”

John was born two months premature in Chicago, Illinois while World War II was raging. John was a fighter and survived in an incubator during those tumultuous times. The first of three children born to James Orvis Marshall and Lucille Copper Marshall of Chesterton, Indiana, his sister Marilyn Ruland (Edwin, deceased) arrived in October 1943, and his brother Jeremy (who predeceased him) (Phyllis) followed in 1946. John and his siblings enjoyed an idealized childhood. Bright and inquisitive, John was a quick study, and learned to play the cornet and trumpet, becoming a fine musician. He often played “Taps” at military funerals for Korean war veterans. By 1954, his father, chasing an impractical dream, uprooted the family to Elk Mountain, Wyoming to pursue a get-rich-quick scheme that did not pan out. They spent a hardscrabble, cold and uncomfortable winter there. They eventually relocated to Laramie, Wyoming. John became restless and longed for a more fulfilling life.

He moved to Denver, Colorado and enlisted in the United States Air Force in January 1961. After basic training in Biloxi, Mississippi, where he witnessed, first hand, the banality and brutality of racism in the Deep South, he spent the rest of his life fighting against the injustices and cruelties inflicted on people by prejudice and bigotry. He was eventually stationed at Vandenberg Air Force Base in Southern California, and at last he found his Promised Land.

At Vandenberg, he wooed and won “the prettiest girl on the base.” After being honorably discharged in 1965, they married and moved to San Francisco to be near her family. They had two sons: John Jr. (Frederick, Md.) and Anthony (New York City) (Jennifer, and beautiful granddaughter Cleo). Eventually, John and a friend bought a San Francisco neighborhood bar. He was also a teamster, driving big rig trucks throughout the Bay Area. By 1969, he and Marie realized that their marriage was over, and although distressed to leave his young sons, they made the painful decision to divorce.

By summer 1970, John started a part time job as a bartender at “Dizzy’s” in San Francisco. It was there he met the cocktail waitress he worked with, Veronica (Ronnie) Del Genovese, a transplanted New Yorker also working part time. She was legal secretary at a San Francisco law firm. They fell in love and married on September 18, 1971. John and Ronnie spent the next 50 years madly in love, through good times and bad, and made a wonderful life for themselves in San Francisco. John had a tender heart for all animals. He convinced his skeptical wife to rescue an abandoned kitty they found one rainy night. Little Gina became the first of many wonderful kitties they shared over the years. By the mid-1970’s, John bought a San Francisco Marina district bar called “Danny’s,” which he turned into the best neighborhood bar around, attracting highbrow and low, and everyone in between. Years later, while living in So. San Francisco, John bought another bar in nearby Millbrae, called “My Brother’s Place” and successfully turned it into another great bar like “Danny’s.”

John finally visited Ronnie’s hometown of New York in 1979, and fell in love with everything about NYC, including live theatre on Broadway, fine dining and fabulous museums. In 1996, for their 25th anniversary, they went to New York and renewed their vows in “The Little Church Around the Corner,” a fabled landmark sitting in the shadow of the Empire State Building. John was embraced by Ronnie’s mom (Frances, deceased) and sister Susan, both of whom loved him very much. Many new friends were made during those great years visiting New York, and John enjoyed his passion for photography, taking hundreds of pictures around the City. John and Ronnie also loved Hawaii and Monterey/Carmel, California, very special and magical places for them. John loved photographing the natural beauty of these spectacular locales. John and Ronnie discovered Palm Springs in the early 1980’s and fell in love with the desert. They moved to Palm Desert when they retired. He still enjoyed photography and took beautiful photos of the desert in all its glory.

In the end, John told his wife and sister that he’d had a wonderful life with his beloved wife Ronnie and her family, and his own beloved sister Marilyn. He loved his sons and was happy to be close with Anthony and his family. His passing has left his family and his many friends bereft and saddened. He will be remembered and loved forever by Ronnie, Marilyn, Susan and Anthony, and all those who knew him well, and recognized what a beautiful soul he was and always will be. Vaya con Dios, darling Johnny.