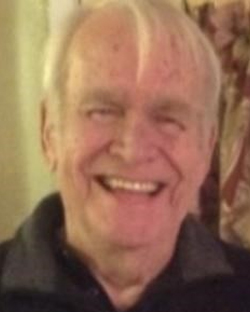 John Burwell Northup passed away peacefully on December 26, 2020 from complications of dementia. John was born on December 15, 1935 in San Bernardino, California to William Ivan and Jesse Leone (Burwell) Northup. Upon graduating from San Bernardino High School in 1953 John attended classes at San Bernardino Valley College and then chose to join the United States Army, not once but twice. During his second tour of duty John served in the 4th Armored Division stationed in Erlangen, Germany, driving a tank during the height of the Cold War. In between his military tours John worked for Rohr Aircraft (later Industries). It was during this time that he was introduced to Yolande, a young French-Canadian widow whom he fell for immediately. After much coaxing on his part John and Yolande were married on April 24, 1960, making their home in Riverside. At the age of 24 John had a wife and three children and couldn’t have been happier. When John came home from Germany he returned to work at Rohr and he and Yolande had a fourth child. John worked in the paint shop and then in tooling, and enrolled in night classes at Riverside City College, enabling him to promote to Industrial Engineer. John was one the first to use Computer Assisted Design (CAD) and was a proud member of SAMPE (Society for the Advancement of Material and Process Engineering), for which he served on the board in various capacities until his retirement in 1990. Always interested in where his family came from, John delved into a years-long genealogy project, researching his family tree clear back to 1100 AD in Layston Parish, England. During this process he met folks from all over the world via written correspondence. You should have seen their extensive Christmas card list! He also stayed busy with numerous projects, served on neighborhood committees, wrote Letters to the Editor and met up regularly with pals from Rohr. Upon Yolande’s death in 2002 John met his second wife, Patricia, whom he married in 2003, and Yucaipa became his new home. John and Pat both shared a love of travel and off they went! They traveled to Alaska, Hawaii, Ireland, England and Panama, just to name a few. John stayed busy at home, too, becoming a member of the Yucaipa Historical Society and the SBHS reunion committee. He and Pat were members of Grace Point Fellowship Church in Yucaipa and hosted a Bible study in their home every Monday night. John and Pat loved being social and were great hosts to family and friends. John was a self-made carpenter, plumber, electrician, architect, auto mechanic and mason, there wasn’t much he couldn’t figure out. He had a number of hobbies and interests, including geology and seismology, playing the harmonica, playing pinochle, whittling, fishing, gardening, and he loved to meet people and listen to what they had to say. He hummed a tune anywhere and everywhere and he loved to laugh. John also had a love of airplanes. He was known to jump up from the dinner table and run outside when he heard some throaty engine in the sky, and was particularly partial to the P-51 Mustang. John was preceded in death by his wife, Patricia, his eldest son, David St.Amand and his brothers, Bill Northup and Dale Northup. He is survived by daughter Lena Lawing (Lenny), son Michael St.Amand, daughter-in-law Sandra St.Amand, daughter Gail Hendricks (Coby), seven grandchildren, six great grandchildren, brother and sister-in-law Dan and Ann Northup, sisters-in-law Betty Northup and Marcelle Quintin and several nieces and nephews.