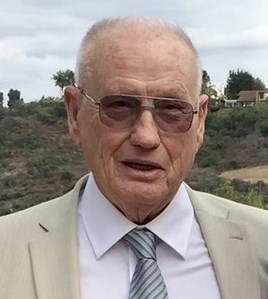 John Preston Ivey passed away on December 1, 2022, at the age of 90, in Riverside, CA. John was born on November 20, 1932, to Preston and Leona Ivey in Oklahoma along with his two younger sisters, Glenda and Laquita. The family migrated to Riverside, CA, when John was 7; the entire family remained long-term residents. John served in the United States Navy during the Korean War and was honorably discharged as a Gunners Mate Third Class Petty Officer. While still in military service, he married his beloved wife Barbara and settled down to have five children: Laura, Lanie, John, Tina, and Francine. John was predeceased by his wife of 60 years, Barbara Mader-Ivey, who he met and fell in love with at Chemawa Junior High School, Riverside, CA. After John’s military service, he worked in private industry for a few years and eventually turned down a career in graphic design to join the Riverside Police Department in 1962. John was part of the Traffic, Motorcycle Division, where he became a Police Special Agent and also oversaw traffic coordination throughout the City for special events. John was proud of his police service and dedication to giving back to his community, serving on several boards, panels, and committees that benefited Riverside City and County. John retired from the Police Department after 30 years of service. John is survived by his children John Ivey, Tinamarie Ivey, Francine Ivey, his son-in-law Mark Campbell, his grandchildren and great-grandchildren, his partner Sharene Greene, and his sister Laquita Adkins.