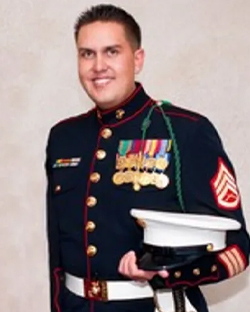 Staff Sergeant, Jose Alejandro Rojas Jr. passed away on June 4, 2022 at the age of 42. His family and friends knew him by his nickname, Camacho. He was born on February 27, 1980 to Jose (Pepe) and Connie Rojas in Flagstaff, Arizona. His family moved to Victorville, California when he was 5 years old. After he graduated from Sultana High School in 1998, he enlisted in the United States Marine Corps.

He attended boot camp at MCRD San Diego. After graduating boot camp he went to the School of Infantry for his combat training and then was assigned to Alpha Company (1/4) 1st battalion, 4th Marines on Camp Pendleton. His next duty station was as a combat instructor at The School of Infantry, also located on Camp Pendleton. After completion of his duties as an SOI instructor, he was reassigned to 2nd battalion 5th Marines also at Camp Pendleton. He remained there until he was transferred in 2013 to Twenty-nine Palms Marine Air Combat Center where he was an instructor for The Marine Corps Tactics and Operations Group (MCTOG). During his time in the Corps, he went on two Marine Expeditionary deployments. One was with the 13th MEU and the other was with the 15th MEU. During his 16 years with the Marines, he went on two regular scheduled deployments and five combat tours. Two of those five were in support of Operation Enduring Freedom (Afghanistan) and the other three combat tours were for Operation Iraqi Freedom. He was considered a war hero by many of the Marines who fought side by side with him. He was awarded many medals for his valor and bravery.