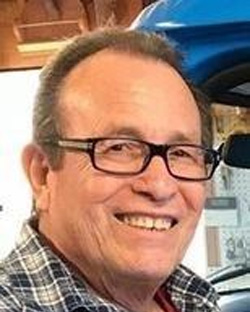 Joe Colvin, a 48-year resident of Hesperia, passed from this world on September 19, 2020 following a brief illness. Joe was born in Morenci, Arizona on July 16, 1940 to parents Pablo and Rafaela Colvin. After completing his junior year of high school, Joe moved with his family to Los Angeles, subsequently graduating from Garfield High. After high school, Joe joined the U.S. Navy, proudly serving as a Radioman/Communications Specialist aboard the aircraft carrier Coral Sea CVA-43.

In 1963, Joe met his future wife, Gloria Jeremiah, of Bell Gardens, CA, and together they raised 3 children. Following his naval service, Joe worked in the telecommunications industry in Colorado Springs, CO; Lake Tahoe, NV; and locally at Continental Telephone’s Victorville office. Joe remained with Contel for over 30 years, retiring as a supervisor, during which time he saw many technological advancements, corporate mergers and company name changes. After retiring in 1995, Joe continued to work for other entities within the telecommunications field in both Nevada and Hawaii, finally retiring for good in 2000.

Joe spent the remainder of his retirement years enjoying his family and friends, and taking up various hobbies, including fully restoring a 1970 Ford pick-up truck for his great-grandson, Christopher. Joe also used his expert woodworking knowledge and handyman skills to help anyone who asked or whenever he became aware of a need, never asking anything in return.

Joe was preceded in death by his parents, Pablo and Rafaela. He is survived by his wife of 55 years, Gloria; daughters Teresa and Cynthia; son Harold; stepson Larry; 4 grandchildren and 3 great-grandchildren; brothers Carlos (Fullerton, CA) and Harold (Phoenix, AZ); sister Hermenia Allensworth (Safford, AZ); numerous nieces, nephews and friends; and many Coral Sea shipmates with whom he remained life-long friends.