Written by Night For Vets on February 19, 2021. Posted in Gone But Not Forgotten 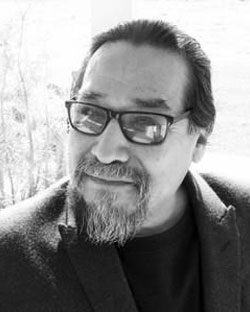 With heavy hearts we regret to inform you of the passing of Joseph Domingo Hamilton, Chairman of the Ramona Band of Cahuilla. Joseph was born on September 18, 1956 in Hemet, California to mother, Anne M. T. Hamilton and father, Frank Hamilton, members of the Cahuilla Indian Reservation. He grew up on the Cahuilla Reservation with his two brothers James Frank Curley and Manuel William Hamilton, and sister, Rose Ann Hamilton. He attended Hamilton School, Hemet Jr High, and Hemet High School before joining the National Guard where he completed his duties in or around 1975. Joseph enlisted in the United States Army where he served and completed his military training in Fort Knox, Kentucky. He served overseas in Australia and Germany before he was honorably discharged in 1978. Joseph was very musically talented as a young child and was a gifted drummer. His father, Frank a renowned musician himself was immensely proud of his son who grew up to become an incredible and talented drummer. He continued his studies at MSJC and became a sobriety counselor. Joseph was a fighter! He survived lung cancer and open-heart surgery which his team of 15 doctors proclaimed him as a “walking miracle”. Joseph functioned through 20+ years with only one lung and he never gave up. He went on to become Vice-Chairman of the Ramona Band of Cahuilla alongside his younger brother, the late Manuel Hamilton. Both brothers went on to establish many endeavors upon the Ramona Reservation. Joseph was known by many to be very giving, generous and supportive where and when he could to many. In 2007, Joseph accepted and honorably served as the Chairman of the Ramona Band of Cahuilla for the past 14 years up until he fell ill around Christmas of 2020 and later diagnosed with the Corona Virus. Although he fought his way through COVID the damage left to his only lung led to his untimely demisewe will miss his many great qualities; leadership skills, influence, charisma, quietness, and his smile. Joseph left us early Saturday morning on January 30, 2021. He is survived by his two sons, Gerald J. Dworschak and Skyylr F. Hamilton, granddaughter, Kaulana Dworschak, sister, Rose Ann Hamilton, several nieces and nephews, half-sister, Barbara Hamilton, half-brother, Rudy Hamilton, and many friends and colleagues who will miss him dearly.