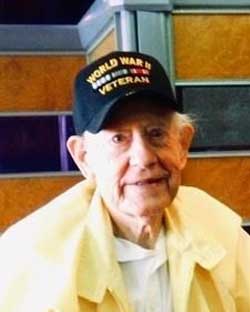 Longtime Hemet resident Joseph Wilson “Joe” Lang passed from this earthly life at the age of 103, on Sunday, July 19, 2020. Born to Joseph J. Lang and Inez (Wilson) Lang, on February 12 1917, in St. Louis, Missouri, he lived his early years in Summitville, Indiana. Coming to California in 1928, he then grew up in Santa Monica. He was often fond of recounting that, in Santa Monica, he could take a swim in the ocean before attending classes at Santa Monica High. A graduate of the University of California, Los Angeles, he enlisted in the U.S. Army in 1941. Shortly after Pearl Harbor, he was transferred to the Air Corps. While in flight training at Thunderbird Field in Phoenix, Arizona, he met the love of his life, Nellie Lassey. They were married November 8, 1942, and lived a long and happy life together until her passing in June, 2009. They were indeed the best of companions. During World War II, service in the Air Corps took him to India, Burma and China. He took great pride in those years. In his later years, his “World War II Vet” cap always brought “Thanks” from those he met, and the exchange of stories related to their military service. To the end, he continued to maintain contact with those fellow vets who had served in the CBI theater. After the War, he continued in the Air Force Reserve, being “called up” during the Korean War, and retired as a Lieutenant Colonel in 1977. After the War, he spent his career with Aetna Insurance Company in Los Angeles as an underwriter in their Casualty Department, setting the rates for some of Aetna’s largest commercial clients. He retired from Aetna in 1980. In 1949, Joe and Nellie bought a house in Temple City, where they lived with their family until moving to Hemet in 1980. The Methodist Church was always the center of their life, both in Temple City and also in Hemet. Both Joe and Nellie held leadership roles in both churches too numerous to mention. In 1999, the Hemet United Methodist Church named them “Couple of the Year.” In their later years, Joe and Nellie enjoyed much traveling. They bought a Lazy Daze motor home in 1973 and spent 20 years traveling about the U.S., Canada and Mexicodriving up and back to Alaska twice. In New Zealand, they rented an RV and toured the country. They were in Norway when 9/11 struckand had another adventure getting back home. They enjoyed life together. And playing cards together in the evening after the dinner chores had been done. And Kiwanis. Don’t forget Kiwanis. Joe was a past president of the Hemet Club and over the years had received numerous awards and recognition, including the Legion of Honor. Joe is survived by his children Richard Lang, JoNell Hjelsand and Bonnie Beland; grandchildren, Christine Lang, Angela Sweet and Lauren Beland; and great-grandchildren, Andrew Sweet and Eva Sweet. He had been preceded in death by his youngest son, Jim. One can only recount here a brief fraction of the roads that Joe traveled during his long and eventful lifea life bracketed by the flu pandemic of 1918 and the coronavirus pandemic of 2020. But those that knew him have their memories.