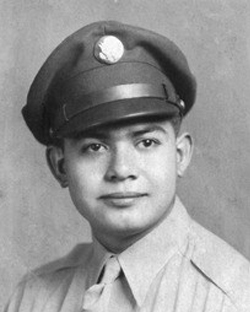 February 16, 1924 – April 17, 2021 Born and raised in Pasadena, Julian quietly passed away from lymphoma at Pomona Valley Hospital. Julian lived a long, full life in his sunny California and found happiness in making the plant world thrive. Learning Latin and Greek in elementary school, he trained in landscaping and gardening by working for the City of Gardena and Descanso Gardens. In the late 1970s, he was also an owner of his own nursery, Medina’s Garden Center, in Ontario. He was a WWII veteran stationed in England with the 135th General Hospital. By day, he was a medic in the city of Leominster and by night, played the trumpet and violin in the Army band. In 1949, he married Dorothy Leal, also from Pasadena, and they had four children. He lived 56 years in the same house in Ontario, tending his own yard until at the age of 94 when he finally relinquished the task to another gardener. Julian loved to go on long drives, fish around the local lakes, drive to the local mountains and deserts, watch a good basketball or baseball game, visit the dairies in Ontario and Chino, or just strike up a conversation with new people. He especially loved family gatherings with good food and loud conversation. His last year was spent quietly with his wife, reading, and feeding the birds and squirrels that paid his backyard a visit. He was preceded in death by his eldest son and survived by his wife, sister, sons, daughter, grandchildren, and great-grandchildren. At his request, he will be cremated and spread among the “roses and trees” throughout the United States. In lieu of flowers, please plant a tree or rose bush for him. He would have loved that.