Written by Night For Vets on November 19, 2021. Posted in Gone But Not Forgotten 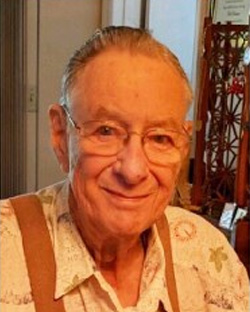 LT. COL. KARL P. KRAEMER, USAF, RET. Lt. Col Karl P. Kraemer, USAF Ret, went from this earth to join Audrée, his wife of 55 years, on Sunday, November 7, 2021, in Highland, CA. He leaves behind three daughters, Patricia Kraemer, Diane Kraemer Breckshot, and Kathleen Kraemer. Karl was born on August 3, 1933, in Des Moines, IA, only child of Karl F. and Thelma (Dawson) Kraemer. Karl was a pilot in the U.S. Air Force for 20 years, flying HC-54, C-124 and C-141 aircraft. After retirement he attended Law School, passing the California Bar Exam on his first effort. He practiced mainly family law in private practice and with Jacoby and Meyers, as a Partner. He retired from Law after 16 years. Karl then served as a member of the San Bernardino Grand Jury for 12 months. After fully retiring, he and Audr‚e traveled extensively until her passing in 2015. Karl was an active member and officer of the local chapters of the national Military Officers Association of America and the Order of the Daedalians, the national fraternity of military pilots. He was a regular lector at St. Adelaide Catholic Church starting in 1976 and continuing for 40 years.