Written by Night For Vets on September 16, 2019. Posted in Gone But Not Forgotten 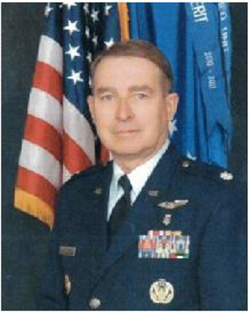 Col Kelly McPeters was born October 14, 1957 to James H. McPeters and Ellen Avery McPeters in Landstuhl, Germany. Kelly completed his mission on Earth on March 13, 2019 of a severe hemorrhagic stroke, suffered the previous Sunday. As an Air Force brat, he relocated several times in his childhood, to include Travis Air Force Base, California; Offutt Air Force base, Nebraska; and London, England. His father’s twilight tour, the one just before his retirement was at March Air Force Base, where his father had met his mother, a Riverside girl.

Entered the Air Force in 1984 achieving the rank of Staff Sergeant prior to being directly commissioned as a 2nd Lieutenant by President Reagan in the Air Force Medical Service Corps in 1996.

In 1992, while at the Association of Military Surgeons of the United States conference in Nashville, Tennessee, he met LT Robin Kuhns Lynn, USN, who was stationed at Naval Hospital, San Diego at the time. It was love at first meet and within the year, they were married, celebrating 25 years of marriage this last October. Kelly retired from both the Air Force Reserves in 2008 and his civilian employment with the San Bernardino Sheriff in 2007 to continue with his life of service as a teacher.