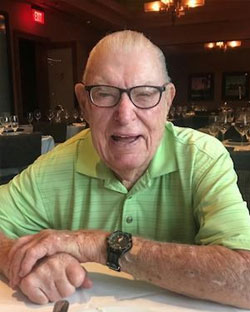 Kenneth John Furst, of Palm Desert, Ca Age 95 died peacefully at his home on July 11th, 2020. He was born on August 1st, 1924 in Lakota, Iowa. He was married to Margaret (Maggi) Irwin for 55 years who preceded him in death in Dec. 2009. He is survived by his only daughter Judy Furst of Palm Desert, Ca and his sister Marge Durkin of Duarte, Ca.

In 1941, he joined the Army Air Corp and became a navigator on a B-17. In Jan. 1942, was shot down over Cologne, Germany where he was captured 12 days later. He lost all of his toes due to frostbite. He was a POW for 4 months until the war ended. He recovered at Birmingham Hospital in Van Nuys, Ca where he was hospitalized for 13 months.

In 1951, he graduated from Optometry school at U.S.C. He started his practice in Vista, Ca. and then in 1978 he moved to Palm Desert, Ca. where he opened an office in Rancho Mirage. He also worked with the Morongo Indian Eye Clinic for 15 years.

He was an avid golfer and belonged to Shadow Mt. Golf Club in Palm Desert, Ca. for over 35 years. His humor was infectious and had so many friends over his lifetime. He was a wonderful husband, and an amazing and heroic father. He will truly be missed.