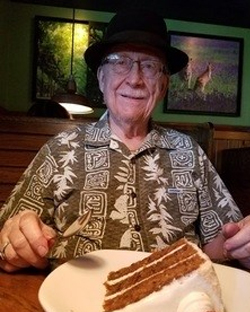 August 15, 1935 – January 8, 2022 Kenneth John Kozlowski, age 86, of Highland, California, passed away peacefully on Saturday, January 8, 2022. Kenneth was born on August 15, 1935, in Lynn, Massachusetts. Shortly after graduating from L’Ecole St. Jean Baptiste, Kenneth joined the United States Air Force and found himself transplanted to San Bernardino, California where he lived the remainder of his life. After his time in the service, he began his 30+ year career as a Civil Engineer with the County of San Bernardino. Kenneth enjoyed many interests including bowling, playing bridge, going to the river, taking pictures, and laughing with family and friends. Kenny K, as he was known to many, will be missed by all who knew him. Kenneth is survived by his brother Larry Kozlowski (Nancy), his children Wayne Kozlowski (Kristine), Lisa Kozlowski, and Kristin Kozlowski, and his four grandchildren Michael Kozlowski, Cory Kozlowski, Brandon Helvey, and Tory Helvey. Kenneth was preceded in death by his wife Janey Kozlowski, his parents Kasimir and Mary Kozlowski, and his son Brian Kozlowski.