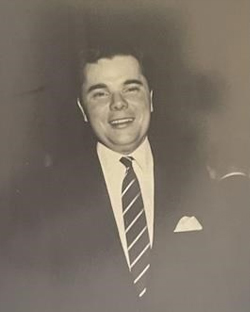 KLAUS “Tony” Reich born 11.19.1936 beloved son of the late Fritz & Adele Reich of Berlin, Germany has passed away. Tony was a long time resident of Suncrest Country Club, Palm Desert, CA. Tony born in Berlin, Germany immigrated to the United States, became a naturalized citizen, and served faithfully, proudly and honorably in the United States Air Force with a sustained display of personal bravery not only in Germany, France, Italy but everywhere he was stationed.

Tony was a pioneer in so many ways to so many people and won multiple awards for serving his communities. He lived in Detroit, MI, Las Vegas, NV and settled in Palm Desert. Survived by two nieces, Karin Vermillion and Magrit Thets of Berlin, Germany, as well as two Great Nephews Manuel Schlicke, Germany and Daniel Vermillion, Hawaii.

Tony will be well remembered for his love of soccer, bowling, the Military, late night television and potatoes!