Written by Night For Vets on December 13, 2019. Posted in Gone But Not Forgotten 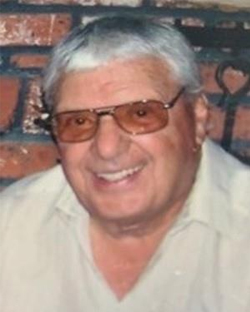 L. John Tonti passed away in his sleep on Saturday morning, November 30, with his wife of 65 years, Louise, by his side. He is also survived by his son John S. Tonti of Moreno Valley, and his daughter Susan C. Tonti of Santa Ana, and by a grandson, Cameron Gaddy of Portland, Oregon.

John was the second youngest of seven brothers, born to Alfred and Asunta Tonti of Canonsburg, PA. on September 6, 1923. John was 96 years old. He was the only one of his siblings to go to high school, class of 1941. John’s parents came to America in 1905 and became citizens in 1944.

John enlisted in the Air Force on December 1, 1942 and joined three of his brothers serving their country in Italy, France and Germany during WWII. Fortunately, they all returned safely home after the war.

Because of the G.I. Bill, John was able to go to college. He enrolled at Indiana University in September 1946 and graduated with his degree in June 1949. He moved to California in 1950 and pursued his teaching career.

It was then that he met the love of his life, Barbara Louise Scott, daughter of Albert and Jewell Scott of Porterville, CA. They married in 1956 and moved to Anaheim. John taught at Anaheim High School for 30 years., retiring in 1983.

Orange County became too big and busy as John and Louise were looking for a place to retire. After much searching, they decided to retire in Sun City Palm Desert. They have remained in their home there for over 20 years and have loved every minute of it. John has made many friends during that time. Most of those have come about through John’s passion for playing golf. He was able to shoot under his age over 1,000 times during his years in Palm Desert. In addition, for many years, John would hold a weekly gathering at his house with a close group of similar minded friends to smoke cigars, drink scotch and tell stories. As John would frequently say, “I really chose the right place to retire and live.”