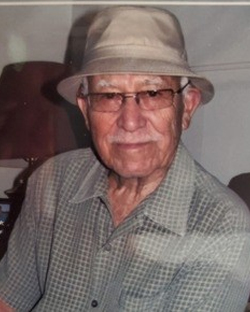 May 7th 1924 – September 9th 2021 Lalo passed away at Riverside Community Hospital at the age of 97. He was born in Guasti, Ca. He was raised and lived most of his life in Ontario, Ca. He is preceded in death by his wife Sarah Olagues who passed in 2012. Lalo was a World War II veteran who served in Germany and France from Jan 1943 to Nov 1945. When he returned from France he married the love of his life Sarah and they were married for 63 years. After leaving his military service he was employed by General Electric Flat Irons in Ontario, Ca. for 36 years until his retirement. Lalo enjoyed his music, gardening, western movies and sports. He is survived by his children Priscilla Poppinga (Frank), Patrick Olagues (Millie), Edward Olagues. He has seven grandchildren and twelve great-grandchildren. Lalo was a wonderful father, grandfather and will be missed but never forgotten by his family.