Written by Night For Vets on September 16, 2022. Posted in Gone But Not Forgotten 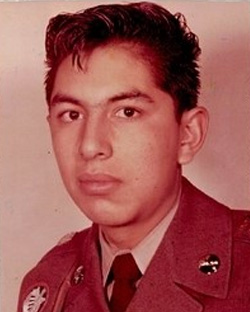 Jan. 23, 1938 – Aug. 29, 2022 Larry C. Holguin Jr. was born on January 23, 1938, to Phyliss and Larry Holguin Sr. he was the oldest of 4 children, sisters, Lorenza, Rosalie and a brother David. Larry lived his life in Redlands. He passed away on Monday August 29, 2022 after a lengthy battle with Pulmonary Fibrosis. Larry was a member of the National Guard until he joined the Army in 1955. He became a member of the 82nd Airborne and went to Jump School at Fort Bragg, North Carolina. He was subsequently transferred to Fort Cambell, Kentucky, but he was only there for a brief time. He entered the 11th Airborne and volunteered for duty in Munich, Germany. He was stationed overseas for a couple of years until his honorable discharge. Larry was immensely proud of his military service, and he frequently recounted fond memories of the Airborne and Germany. Larry was able to travel back to Germany to visit his favorite locations and friends. After his military service, Larry worked for Big Bear Timber Company. That was the start of a long career in the lumber industry. After completing his business certificate at Skadron Business College, he became a successful lumber broker and worked many years for Inland Lumber Company in Grand Terrace, CA and All Coast Forest Products in Chino, CA. At various times in his life, Larry was active in both Lions and Elks Club. Larry is survived by his wife Irene of 62 years, two children, Debbie (Donald) Bueermann and Eric (Deana) Holguin, three grandchildren, Ashten Fedorchak, Jessica Bueermann and Raymond Bueermann.