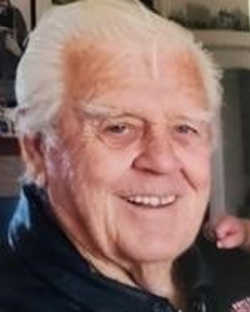 Larry has taken his last flight from earth into the arms of our Savior. Larry was born March 17, 1941 in Granite City, IL, the first of four children. He lived on a farm with his family and was driving a tractor at nine years old. He attended Roxanna High School and East Alton-Woodriver High where he met his future wife, Elizabeth. He joined the Air Force in January 1960. While serving his country, he was a Fabrication and Parachute Specialist. He received several medals during his service. Larry married Elizabeth on November 17, 1960. They had four children, Dawn, Dwayne, Dean, and Dianna. Larry retired from the Air Force on January 31, 1980. He worked various jobs, providing for his family. He delivered trusses, did heating and air conditioning, and drove a big rig for Arrow Trucking. He was a skilled upholsterer and enjoyed upholstering airplane interiors and windshield covers.

He leaves behind his wife of 60 years; his four children; 11 grandchildren; and 15 great-grandchildren; his sisters, Sue, and Missy; and many nieces and nephews. His favorite past time was playing Lotto with his friends.

Dawn: I love you so much, dad. My dad was the smartest man with the best way to tell you or show you how to do anything and everything and was always the right way. I should have listened more. I wish you were still here, Dad. I know you would be more proud of me now. You were always very friendly, always smiling, and sociable and that made you the best of friends to everyone he met. Until I see you in Heaven Dad, fly high with my son, your grandson, Luke and everyone else in our family that have gone before us. R.I.P. Daddy, My Guardian Angel.

Dwayne: My father: I remember spending countless days with my Pops in the garage helping him with his upholstery jobs, and countless days at the airport working on the planes he was re-upholstering! I also worked with my Pops out of High School at Marimac Development Heating and Air Conditioning. Pops taught me the value of hard work and getting the job done right the first time!! The best memories were Pops taking me to the airport, climbing in his Cessna 182 and flying to Blythe for breakfast. Also, the many trips to the river, water skiing, and camping under the stars. I will always cherish these times together with my Pops!

Dean: My father: A man who touched so many lives in the community. It didn’t matter if you were a long-time friend or someone he just met, he would always have an open heart and a touching hand to help everyone he could. Missing you father.

Dianna: My dad was genuine. He was the kindest, warm hearted man I have ever known. He lived a full life doing what he loved. I will miss him dearly. I love you, daddy!