Written by Night For Vets on October 28, 2019. Posted in Gone But Not Forgotten 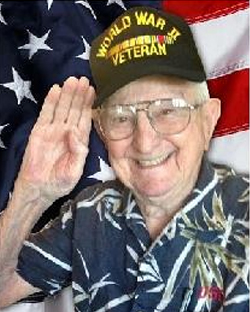 Lawrence Johnson (Cack) was surrounded by his family when he passed away October 16, 2019 in Mission Viejo, California, just four days shy of his 100th birthday. Cack was born in Dublin, Arkansas on October 20, 1919 to Martha and Hugh Johnson. Cack was a WWII combat veteran who served in the European theater and was a life member of the Veterans of Foreign Wars, VFW Post 6024. He was truly a member of the greatest generation.

He met his wife of 66 years , Gladys Stevens, in California where they settled to raise their family. They enjoyed a great life together playing golf and traveling around the U.S. Cack always provided for his family with a 45-year career with Von’s Grocery Company. When Gladys passed away in 2010, Cack was spoiled by his children, grandchildren and great grandchildren with many visits, countless games of dominos and trips to Polly’s for breakfast. Many who knew him characterized Cack as one of the most caring and gentle people they had ever met.