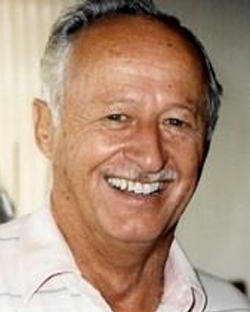 Leland Marvin Zepede passed away at the age of 91 on Wednesday, August 4, 2021, in the comfort of his home surrounded by his family. He leaves to cherish his memory, wife Ruth Zepede; three daughters, Lee Dixon, Teri Zepede, and Jane Rokus; five grandchildren, Christopher Dixon, Scott Dixon, Jeff Dixon, Cory Rokus, and Kristal Zepede; and ten great grandchildren. Marvin was born September 13, 1929, in Los Angeles, California. The second oldest of three children, his siblings preceded him in death. He graduated from Compton High School and continued his education by attending a trade school for carpentry. He served as a reservist in the United States Naval Construction Battalions, better known as the Navy Seabees. His first civilian job was as foreman at a cabinet shop. While working there, the hardware supplier went out of business and Marvin bought what was to become Cabinet Hardware, a business that lasted more than 25 years. Marvin loved restoring old cars, gymnastics, hunting, boating, water skiing, golf, and building houses–including the furniture. In 1946 he met the love of his life, Ruth Ellen Wade and married her in 1949. They were married 71 years as of their last anniversary in November 2020. In 1952 they moved to Paramount where he built the house to raise their three daughters. He retired at the age of 55 and moved to Murrieta, California, with his lovely wife to build the house of their dreams. He was a member of the National Ford Club, Mt. Palomar V8 Ford Club, Family Motor Coach Association, Bus Nuts Club, the Lad and Lassies Golf Club, and was on the committee for Murrieta’s cityhood.