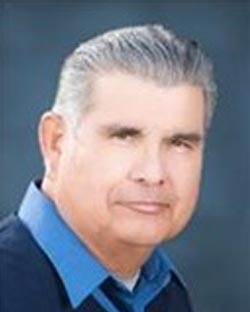 On Sunday, February 16, Leo Aragon Medrano, passed away at the age of 75 at his residencejust feet from where his wife was called home 20 months earlier. He battled with COPD due to service-related asbestos exposure and was on oxygen for 11 years. He was born in Glendale, CA to Oscar Aragon and Carmen Cruz. Never knowing his birth father, he called Demetrio Medrano his dad. Leo, the big brother of his family, is now reunited with his parents and siblingsJoey, Johnny, Gloria (Contreras) and Demetrio. Leo came from humble beginnings and grew up in small railway section housing. As a child he called cities spanning from Needles to Torrance home. He moved to Rialto during his senior year, but graduated from Torrance High in 1962.

Leo proudly joined the U.S. Navy during the Cuban missile crisis and served from 1962-66 aboard the USS St. Paul (CA-73). He would fondly recount stories like the time a camera crew came aboard ship to film In Harm’s Way. He loved to tell people how he blinded Kirk Douglas with his camera flash and has the picture to prove it! After completing his naval service, Leo moved back to Rialto and worked at Kaiser Steel. In 1973, he married the love of his life, Nora Due¤ez, and settled in Loma Linda to raise their son and twin daughters. He taught them the importance of hard work, education, sacrifice, and how to pick a good cut of meat.

Like his father, he worked for a short time with the Santa Fe railroad. He didn’t mind working in the summer heat of the Mojave desert if it meant providing for his family. He loved returning home with gifts of geodes and tales of his encounters with sidewinders and scorpions. Ultimately, Leo returned to government service working for the U.S. Postal Service for 22 years delivering mail and small talk for 20 of those years in the foothills of Del Rosaand retired in 2007.

He enjoyed travelling throughout the U.S., Mexico, Canada and Europe. Once he drove his young family (crazy) on a 7,500+ mile trek to Alaska and back in a ’69 Chevy station wagon while pulling a travel trailer. He enjoyed the outdoors, from relaxing at Redondo Beach with the surfboard he made to hiking the highest peak in SoCal as a Boy Scout. He loved to talk (give unsolicited advice), buy gifts for his grandkids, and cruising to his oldies-but-goodies. He liked to dine-out with family and friends and savored menudo, chile rellenos, and a good steak. Ever the generous man, Leo never forgot that he came from humble beginnings. He did his best to help out his family and friends. Leo was a proud man, but never prouder than when telling people about his children and grandchildren.