Written by Night For Vets on June 20, 2019. Posted in Gone But Not Forgotten 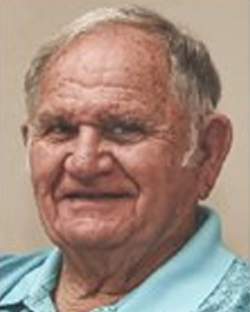 Louis Bradvica, a long-time Riverside, CA resident, passed away at his home on June 4, 2019. He was 91. Louis was the youngest of six children born to parents who were ethnic Croatians from Bosnia-Herzegovina, both of whom had immigrated to the U.S. when Bosnia was part of the Austro-Hungarian Empire.

His life’s journey took him from East Los Angeles, where he grew into a multi-sport star at Cathedral High School and received an athletic scholarship to play football at St. Mary’s of Moraga, back in the days when St. Mary’s was known as the Notre Dame of the West. His prowess on the gridiron inspired writers to draw cartoons highlighting his feats as a triple-threat fullback and earned him the nickname "Lou the Shoe."

After graduating from St. Mary’s and a stateside stint in the Army during the Korean War, he married the love of his life, Shirley Mandic, who passed away last year after 65 years of marriage. Eventually, Louis and Shirley made their way to a dusty ranch on the bank of the Santa Ana River, where they raised six children and a wide variety of animals, including horses, pigs, chickens and parakeets.

With the moral and financial support of his older siblings, Louis started three businesses, including a cabinet shop and an employee-owned manufactured housing company, Hallmark-Southwest Corporation, that built thousands of homes and employed thousands of employees over 42 years before being sold last year.

Louis and Shirley’s devotion to their children was displayed through their tireless volunteerism. Shirley was a PTA president; Louis coached football, basketball and baseball in Bloomington, where their children went to grade school, and later at Notre Dame High School in Riverside, which all of their children attended and made their mark as outstanding students and athletes. Louis and Shirley also ran a weekly bingo game fundraiser for Notre Dame for more than a decade.

Louis’ love of the sporting life was expressed through his life-long interest in breeding and racing thoroughbred horses. The highlight of Louis’ horse racing career came in the 1990s, when the gelding Touch the Moon ran his way to four victories and more than $200,000 in career earnings.