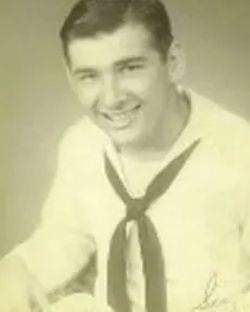 Louis Joseph Duwel, age 90, passed away August 16, 2022, at home with his daughter by his side. The youngest son of Henry (1976) and Rose Duwel (Windholtz) (1997); brother to Robert (2020), Donald (1952) and Alvera (2009); devoted husband to Madeleine (2001). Beloved father and grandfather, he is survived by his children Christopher (Brenda) and Patricia, and grandchildren Juli (Christopher) and Edward (Joey). Originally from Cincinnati, Ohio, Louis joined the Navy in 1950 and was stationed on the USS Helena CA-75 out of Long Beach during the Korean War. Louis met and married Madeleine Fox in 1954 and they settled in Long Beach where they were active in the St. Anne’s Guild of Our Lady of Refuge Catholic Church. He worked for the State of California, retiring as a carpenter in 1987. In 1989, Louis and Madeleine moved to the “Ranch” in California Valley, where they were enthusiastically involved in the local Carrizo Plains community. In 2007, Louis moved to Apple Valley to be close to his children and eventually moved next door to his daughter.