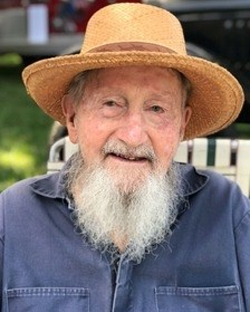 Louis Calvert Gakle died peacefully in his sleep on September 7, 2022. Born on September 4, 1922 in Ontario, California to Louis Lester and Pearl (Bentley) Gakle, he called Southern California his home for 100 years. Louis grew up in Ontario raising purebred milk goats on the family farm. He joined the national guard in his junior year at Chino High School. After graduation in 1941, Louis proudly served in the Army Air Corps during World War II. As an airplane mechanic technician from June 1941 – June 1945 he saw battle in the Asiatic Pacific Theater and was awarded several medals. Once home, Louis married Barbara Jean Owings in 1945 and raised two daughters in Cucamonga. He was a postman in Ontario for 38 years and was a founding member of the Cucamonga Volunteer Fire Department where he served for over 15 years. He was preceded in death by his wife of 66 years, Barbara Jean (Owings) Gakle, his parents, and 3 siblings. Louis leaves behind his two daughters Dorothy Jean Wood and Patricia Ann Von Kleist, 6 grandchildren, 19 great grandchildren and 6 great great grandchildren, along with many extended family members.