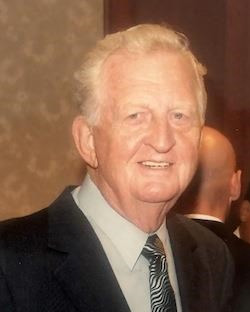 Louis Lavern Sporrer (Lou), a true hero to our country, passed away on July 30, 2020 at the age of ninety-three.

Lou was born in Manning, Iowa on April 6, 1927 to his loving parents, Edward and Agnes Sporrer. Their family made the move to California in 1939 where Lou fortuitously met and married his Inglewood High School sweetheart, and love of his life, Norna Mae Russell. The couple married in 1947, and had just celebrated their 73rd year of an amazing marriage on June 15.

To say Lou’s life was a rich tapestry of hard work and dedication, would be a drastic understatement. He courageously served his country as a proud WWII Veteran of the 6th Marine Division, JASCO Company. He bravely fought in the Battle of Okinawa, receiving a Certificate of Honor for being one of the first soldiers in the Marine Division to land in Japan for the Japanese Surrender.

After returning from his military service, Lou went on to obtain his Bachelor’s Degree from Loyola University, and later earned his Master’s Degree from Pepperdine University. Lou started his career at Standard Oil, but at twenty-two, found his heroic calling into service once again for the Los Angeles Police Department. During his time at the LAPD, Lou contributed to many firsts in the department; however, he was most passionate about unifying his community, and dedicated himself to the Youth and Police Explorer Program. He was also a big supporter of the newly developed D.A.R.E. program. Lou proudly served as the President of the Peace Officer’s Association, and as a member of the International Chiefs of Police (POST).

Lou rose through the ranks and ended his 30 year career as Assistant Chief of Police of LAPD. Although retired, his dedication to service did not end there. Lou went on to serve as a consultant for the California Round Table, was Director of Security for an exclusive, private country club, and his security expertise was sought after when he was asked to become Assistant Director of Security for the 1984 Olympics.

Lou soon combined his love for the sport of golf with his natural leadership ability, when he became the President of the Acquisition Corporation for IWCC, where he also served on the Board of Governors.

Lou’s service to his country will forever be remembered by many, but his loss will be most greatly felt by his wife and family. Lou is preceded in death by his parents, and his grandson, Douglas Sporrer Junior. He is survived by his devoted and beloved wife Norna, and his adoring children, Lynn Sporrer, Douglas and Kelly Sporrer, as well as his loving grand and great-grand children, Pyper Sporrer-Johnson, Seth Sporrer, Montana and Harley Johnson, Paige Johnson, Drew Johnson, and Jakiya Sporrer.