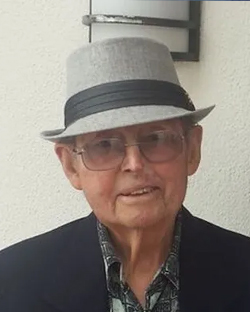 Lynn Dean Hutchinson, 91, passed away after a brief illness on February 14, 2022. Dean, as he preferred to be called, was born on January 31, 1931, in Strawn, Kansas, to Levi Earl Hutchinson and Dollie Mae (Smith) Hutchinson. Dean is preceded in death by his parents, his sister Yvonne Duree Knectel, and his wife of 55 years Lois Ann (Vivian) Hutchinson. He is survived by his daughter Mary (John) Gerardi, sons Dale (Julie) Hutchinson, and Earl (Debbie) Hutchinson, as well as grandchildren Andrew and Kathryn Hutchinson. Dean was 6 years old when the Hutchinson family left Kansas for the allure of the West in 1937. The young family traveled to California, settling in the Bell Gardens area, then moving to the Burbank area in the San Fernando Valley. While his parents worked at Lockheed Aircraft during World War II, Dean attended to his chickens and rabbits, as well as playing sports, bicycling, riding the street cars, and peddling newspapers. After the war, the family returned to Bell Gardens, where Dean attended Bell Gardens High School. With the start of the Korean War, Dean enlisted in the Air Force, and was assigned to Larson Air Force Base near Moses Lake, Washington. Dean was trained as a dental technician, and assisted many soldiers with dental procedures as they traveled to and from Korea. Dean was called upon to assist in identifying soldiers killed in a terrible airplane crash during Christmas of 1952, as a C-47 Transport crashed on takeoff on December 20, 1952. Dean was honorably discharged as a Staff Sargent after the war. Dean returned to Bell Gardens, and began his construction career as an interior and exterior Lather, during the post war construction boom. During this time, his parents invested, built, and managed a small motel in Desert Hot Springs. Dean and his friend Earl began spending weekends in the desert, helping build small buildings in the High Desert during the homesteading of the Landers and Flamingo Heights area North of Yucca Valley. Dean was introduced by friends to a Minnesota native who had relocated to Los Angeles, and the courtship of Lois began. Dean and Lois married in 1959, and welcomed their son Earl in 1960. They moved to Yucca Valley in 1961, as the housing construction began to increase in the desert, as well as to be closer to his parents. The family continued to grow, with Dale born in 1963 and Mary in 1967. Dean and Lois moved to Desert Hot Springs in 1968 to help manage the family motel due to his father’s poor health. Lois became the secretary at Desert Hot Springs Elementary School, and Dean continued to work as a lather, working on numerous construction projects throughout the Coachella Valley and Hi Desert. He was able to withstand the economic ups and downs in the housing industry, and helped many individuals get started in the construction trade. Dean worked as a housing project superintendent in the mid 70’s, but returned to exterior lathing after obtaining his contracting license. Dean was a true artisan, and a master of his craft. He made lathing look easy, whether it was climbing and working on elevated scaffolding, working during the hot summer months, or creating ornate exterior elements on commercial or residential buildings. He was always available to help anyone, and would frequently lend tools and equipment to others, knowing that he may not see the tools again. It was his way to help get someone started, or help them build their business. Dean and Lois retired in 1997, and enjoyed traveling, especially to Vegas and Laughlin, trips to Del Mar to wager on the horses, playing the weekly Lottery, as well as spending time with their grandchildren. Dean continued to keep in contact with many in the construction industry, and as an early riser, he participated in numerous "coffee klatches" at the local donut shop or restaurants. He was an avid reader and historian, and could tell stories about the community, how they were developed, and those who helped build them. His love of trivia was amazing, and he could keep up with many of the contestants of Jeopardy. Lois passed away in 2015, and after some medical challenges, Dean moved in with his daughter and son-in-law in 2016. He continued to attend his coffee groups when he could, and always stayed current on trivia and history. His smile, humor, knowledge, and historic memory will be truly missed.