Written by Night For Vets on July 6, 2018. Posted in Gone But Not Forgotten 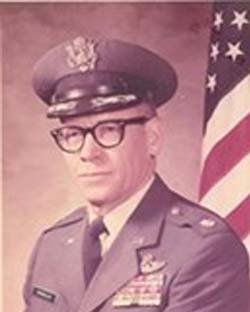 Marlon Davis Wasemiller passed away on June 19, 2018 at age 97. Born in Lehigh, Kansas, he attended Bethel College in Newton and entered the U.S. Army Air Corps in 1943. He received his pilot wings in 1944 and served 35 years in the Air Force flying over 5500 hours, including 971 combat hours in England during WW2 and Vietnam. Military awards include the Distinguished Flying Cross, the Bronze Star, the Meritorious Service Medal, seven Air Medals, and the Presidential Unit Citation. He was a member of the Order of Daedalians, the Distinguished Flying Cross Society, the Military Officers Association of America, and the Air Force Association. He retired from the Air Force in 1977 with the rank of Lieutenant Colonel and resided with his wife Normalee in Redlands, CA until 2006 when they moved to Air Force Village West near Riverside, CA. He is survived by his sons Marty and Lonny, his grandson Travis, and his daughter-in-law Diane. His wife predeceased him in 2008.