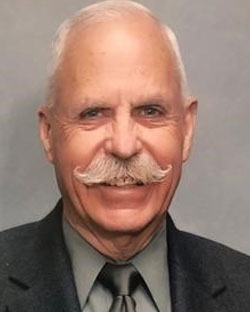 Marshall Clay Scott, born March 20, 1936, in Deming, New Mexico, died January 2, 2021 in Moreno Valley, California. Marshall was preceded in death by his parents, Noah A. and Evilyn M. Scott, and brothers Edward, Noah Jr., Elbert, Frederic, Leon and Luke. He is survived by his wife Frances Gililland Scott; daughter, Kari Lorraine Scott (Dino Serafini); son, Marshall E. Scott (Laurie Lampley); grandsons Raymond Scott and Pedro Scott, along with sisters Genie Mosher, Jewel Downs, June Kofford, Kathy Marlowe, Christena Scott and brothers, James Scott and Phillip Scott. Marshall grew up in Deming, New Mexico. He served four years in the United States Air Force and then attended New Mexico State University where he received a Bachelor’s and Master’s degree in Agricultural Economics and Agricultural Business. He met Frances, the love of his life, on a blind date June 6, 1956. They were married August 31, 1957. Both of their children were born at NMSU. Upon graduation in 1964, the family moved to Riverside, California, where Marshall started his career in banking. His banking career moved the family from Riverside to El Centro, to Blythe, to Hemet and finally in 1971 to Moreno Valley (Sunnymead), where they lived until 2017 when he and Frances downsized to Altavita Village in Riverside. Marshall left his banking career in 1976 and distinguished himself in the business community as the owner of a successful State Farm insurance agency. He served his community for many years in many different areas including being a champion for the incorporation of Moreno Valley and serving as the City’s first mayor. He was founding/charter chair of the Board of Cal-West National Bank, Moreno Valley United Way Campaign and Moreno Valley Morning Rotary Club. He served as Council President for the local Boy Scout Council and was an avid supporter for 22 years. As a member of the Moreno Valley Chamber of Commerce, he served on the Military Affairs Committee, Industrial Development Steering Committee, Honorary Commanders of March Air Force Base and was selected two-times as the Chamber’s Citizen of the Year. He served on the Economic Council of the Riverside Department of Development, was a member of the Riverside County Association of Life Underwriters, and California Association of Life Underwriters. He especially enjoyed serving on the Board of Directors for Idyllwild Pines Christian Camp and for March Field Museum. He served for many years as a Deacon at First Baptist Church and was involved in many other areas of leadership and mentorship. Marshall and Frances enjoyed traveling and were blessed to visit many beautiful places around the world. It was their delight to take their grandsons along on many vacations. Marshall enjoyed his final years visiting old friends, making new friends at Altavita Village, and attending Bible study and church.