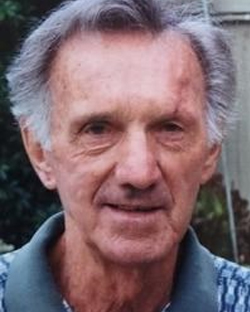 Marvin (Marve) Hagel Marvin (Marve) Hagel, a longtime resident of Riverside, CA, went home to be with the Lord on December 12, 2020 at the age of 93. He was preceded in death by his parents Fred George Hagel of Cleveland, Ohio and Catherine Homan of Iowa, foster parents Chester A. McCollum and Gladys (Hap) Brock McCollum of Riverside, CA, sisters Kathleen Yano of Parma, Ohio, Helen Ann Kremm of Southington, Ohio, brother Fred Cecil Hagel of Willoughby, Ohio, and foster brother Howard Brock of Sun City West, Arizona. His beloved wife of 53 years, Maleah (Lee) Hagel passed away on March 22, 2011. He is survived by daughters Debra Hagel-Wollman (Mark) of Sherman Oaks, CA, Susan Hagel of Aliso Viejo, CA. and brother-in-law Kenneth C. Kremm of Southington, Ohio. He also left behind many adoring nieces and nephews and several close family friends. Marvin was raised in Cleveland, Ohio. He left high school early to join the U.S. Merchant Marines in WWII, and served from 1944-1946. When the war ended in 1945, he stayed on the ship and sailed the Pacific for 13 months. He went back to Cleveland where he finished high school, played basketball, football, and helped his high school team win a state championship. He made his way to CA in May of 1947 before being drafted by the Army on February 22, 1951. He took basic training at Camp Roberts, CA. He served in Korea with the 2nd Division, 38th Infantry as a Corporal from 1951-1952. After Korea, he went back to Cleveland, bought a 1952 Bel-Air Chevy for $2,399 and enjoyed many adventures as he made his way back to Riverside, CA. Marvin loved being active. He skied, golfed, played softball in the late 40’s and 50’s, played semi-pro football with the Corona Rockets and bowled with many of the top leagues and bowlers. He even finished sixth in the National Bowlers Tournament and received a check for $400 in 1955. He was introduced to his lovely wife Maleah Solomon by one of his bowling buddies, and the two were married in 1957 in a small ceremony at Our Lady of Perpetual Help Church which is across the street from their first and only home. They had 2 daughters. Marvin was active at OLPH church as an usher, and could be counted on without fail to set-up and tear down booths for the annual fiesta and served in the food bank ministry handing out food to the homeless. His 2 daughters attended Notre Dame High School. He and Maleah attended football games, basketball games as well as track meets and loved to support their daughters’ friends and classmates. Marvin had a passion for the lumber business which turned into a life-long career. His energy, attention to detail and incredible work ethic made him a perfect fit. He worked for several local companies including Hammond Lumber Co. in Fontana, Boyd & Lovesee Lumber Co. and Champion Lumber Co. from where he retired in 1990. He continued to stay busy and fit after retirement by taking walks several times a week up Central Avenue and around the plaza as he made his way to the home of each of his 3 sisters-in-law to check on them and offer any help needed. He developed a love for jigsaw puzzles and put together well over 70 of them. He also enjoyed several trips to Las Vegas to meet up with his nieces and nephews from Ohio. Anyone who knew Marvin also knew he was an avid Cleveland fan. All sports, but mostly he loved the Browns. When the Browns weren’t on T.V. he would head over to Lake Alice in downtown Riverside to enjoy a quiet breakfast before the football game started. Then one by one, his adoring nieces and nephews would show up surrounding him and offering his favorite team cheers of support. It’s hard to put into words what this treasured man’s life has meant to those he left behind. He was a humble, tender-hearted man who loved God, his country, his family and his friends. He taught us the value of hard work, generosity, gratitude, integrity and prayer. He demonstrated amazing perseverance through many health challenges later in life. And through it all he continued to make us laugh. We love and miss you dearly.