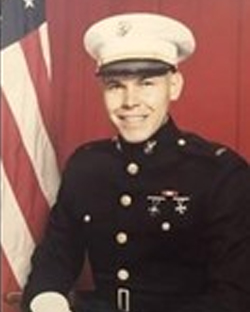 Lt. Col. Melvin Vahan Cratsley, Age 72, of Temecula went to be with his Lord on July 24, 2019, while surrounded by family at home after a five year struggle with cancer. Melvin was born on December 13, 1946 to Frank Melvin and Isabelle May Cratsley of Pittsburgh, PA. He was the oldest of five children. Lt. Col. Melvin Cratsley retired from the Marines in 2000 accumulating 28 years of service. After 20 years as a Chrisian school teacher and principal, Melvin continued his ministry as pastor of Grace Fellowship in Temecula, CA and remained in this position until his death.

He is survived by his wife of 43 years, Ernestine "Ernie" Cratsley; his two sons, Michael (Frances) Cratsley of Gaithersburg, MD and Jonathan Cratsley of Temecula, CA; his two daughters, Miriam Cratsley of Pittsburgh, PA and Hope (Calvin) Jones of San Bernadino, CA; and his 4 grandchildren, Hailey, Parker, Nina, and Erin. He is also survived by his two sisters, Karen (Richard) Meyers and Marion (Larry) Stawartz; two brothers, Herbert (Maria) Cratsley and James (Agnes) Cratsley; brother-in-law James "Nat" Butler; and many nieces and nephews.