Written by Night For Vets on October 26, 2021. Posted in Gone But Not Forgotten 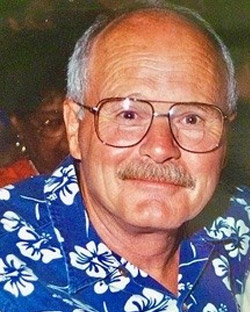 11/27/1942 – 9/23/2021 Mike died peacefully at home surrounded by family in Torrance, California on September 23, 2021 after a long battle with Lewy Body Dementia. He leaves behind the love of his life, Cathy Denning, his devoted wife of 42 years, as well as his nieces Mindy, Lee Ann, Laura, Megan, Elsey and Nora, his nephews Scott, Mark, Roe and Sam, and his cousins Deb and Rand. He was preceded in death by his mother, Rhea Simpson, his father, Glen Denning, his sisters Laurel Lee and Myrna Lou, his Uncle Robert, Uncle Richard, Aunt Grace, his cousin Richard and nephew Matt. Mike was an extraordinary human being, a devoted husband, the patriarch of his family and beloved by all who knew him. Mike spent his childhood in Ohio before joining the Navy and serving 8 years aboard ships during the Vietnam War. He then moved to Colorado and became a Deputy Sheriff for the Denver Sheriff’s Department. He was a surrogate father to his nephews Mark and Matt after the death of their mother, Laurel Lee. It was during this time that he developed a life long love of photography. Mike then moved to California where he made a career of driving buses for Airport Service and Ontario Montclair School District. He also worked for a time for Paul Thompson’s Wedding Photography and later did his own wedding photography business. While working for Airport Service at LAX he met and married his wife, Cathy, in 1979. At the age of 64 he proudly graduated from Riverside City College with an AA degree in 2006. Mike retired in 2005 from OMSD. Mike was an avid student of history. He loved to write stories and loved being around horses. His favorite horse he enjoyed riding the longest was named KC. Mike and Cathy loved to travel together, visiting many countries in Europe over the years. He loved to watch movies, in particular Westerns and film noir and could talk about moviemaking for hours. He loved spending time with his family and made a point of showing up for all the special occasions in their lives. When he hugged you, you felt like all was right in the world. Mike will be remembered as a man of substance in every way. He was loyal, trustworthy, and a man of his word. He loved his family deeply and unconditionally. He was a true and dear friend. Mike had a clear moral compass that guided him throughout his life and continues to inspire and instruct those who love him. Our collective hearts are broken with the loss of this special man who will continue to live in our hearts and memories forevermore. The family would like to express their gratitude to the staff of Torrance Memorial Hospice for their loving care of Mike and the support and help they thoughtfully provided for the past year to Cathy and him.