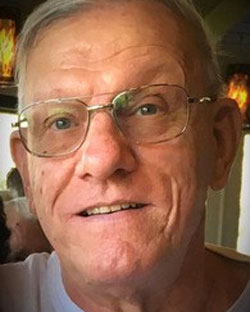 September 14, 1946 – March 19, 2022 Michael ‘Mike’ Kolendowicz, age 75, passed away at his home in San Bernardino, California from cardiac arrest. He is survived by his wife Sam, five children Larry, Michael, Danny, Sammi, Julie, and three grandchildren. He was overjoyed to know his fourth grandchild was due later this year. Mike was born in Edwardsville, Pennsylvania to Margaret and Felix, younger brother to Phil. After an idyllic childhood catching fireflies and fishing in the forests near his parent’s home, he joined the U.S. Air Force in 1966 where he traveled the world as an aircraft mechanic on C-141 cargo planes. His skill was honored with several commendation medals and numerous ribbons. He met Sam in the service and they married in 1982. He retired from the Air Force in 1987 and then worked as a maintenance technician for the McLane company while raising their children. Since retiring from McLane he has enjoyed spending time with his family and growing a small citrus orchard at home. This November will be his and Sam’s 40th wedding anniversary.