Written by Night For Vets on July 7, 2020. Posted in Gone But Not Forgotten 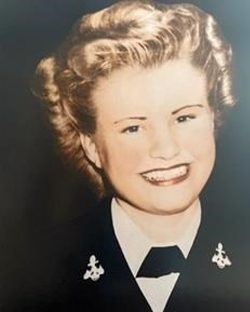 On June 20, 2020, the heavens rejoiced as an amazing woman named Mildred “Millie” Johnson was called home. Millie was born on December 29, 1923 in Newark, New Jersey as a fraternal twin to Austrian immigrants, John and Marie Huth. To have known Millie was to love her. She had an exceedingly kind soul but a “tough as nails” attitude which came from being in a family of seven. From a young age Millie defied the norm and enlisted in the Navy at age 21. There she found her passion. She served four years and attained Third Class Petty Officer for Naval Intelligence. She was trusted with delivering top-secret documents to officers and generals during World War II and even met President Dwight Eisenhowerhow cool was that! During her last year of service, she met the love of her life, Captain Hap Johnson. The happy couple married in 1948 and relocated to California. Millie Johnson became an amazing mother of three boys, Dwight, Carl and Donald, as well as a stepmom to Danny. While her husband ran a successful construction company, Near-Cal Corp., she blazed her own path and opened The Pink Poodle shop in Tustin, CA. Her love for animals was supreme and all animals loved her in return. She operated her business successfully for over twenty years. Millie was also an amazing cook and possessed a passion for travel and musicone could always hear Millie humming a tune. She was also an old school diva who relished weekly beauty parlor appointments. Her hair was always stunning. Millie Johnson grew up during a time when women were not always recognized for their accomplishments, but she sure did make her mark on her family and friends. She was the foundation that held everything and everyone together. She also kept everyone in line. Millie was a no nonsense, caring, feisty and beautiful soul. She was instrumental in not only raising her sons but helping to raise some of her grandchildren as well. The family is strong and secure because of her. Millie was fortunate to spend her final days at her eldest son Dwight and Cindy’s home where she was surrounded by family and friends, amid a pandemic! To say that her life was ordinary would be an understatement. Millie Johnson is survived by Dwight and Cindy Johnson, Carl and Mary Johnson, Donald Johnson and Danny and Roche Johnson. She was blessed with ten grandchildren and fourteen great grandchildren. To know her was to love her. The family will continue to spread her legacyJohnson strong always and forever!