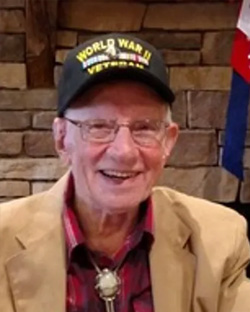 Morris “Morrie” Lee Hegg died October 6, 2021 of covid related pneumonia. He had a full life of 94 years with many adventures.

Morrie was born July 11, 1927 at the Monrovia, CA hospital. He graduated in a class of one from the Monrovia-Arcadia-Duarte High School. Neither of these institutions exist today. His early graduation was facilitated so he could enlist for World War II. He served in the 11th Army Air Corps on Adak in the Alaskan Aleutian Islands working in communications, bridging the link between Washington DC and the South Pacific Theater.

When he was discharged after the war he went to Pasadena Junior College for Journeyman Plumber training. He joined his father and brothers at the family business, Hegg Plumbing in Arcadia, CA. He eventually purchased and ran this business for many years.

He served his community on the Arcadia Planning Commission; the Exchange club, working his way up to be Governor of the Southern California district; as well as in the Plumbing, Heating, Cooling Contractors Association, working his way up through various offices to become the president of the PHCC for the state of California. Morrie enjoyed spending time with his family, sitting on the back patio watching the hummingbirds, and the airplanes landing at El Monte airport, camping (progressing from a tent trailer to a motorhome in which he and Dixie lived for 13 years), enjoying Dixie’s many garden roses and especially her potato salad alongside his barbecued burgers.

Dad was very patriotic. In his later years he was given a WWII Veteran hat that he proudly wore whenever going out to appointments or to restaurants. Many times he would get a “Thank you for your Service” comment. Those meant quite a bit to him. Please keep that tradition up for any veterans you see. Several times when they went to pay their bill, they would be told it had already been paid for them, and another “Thank you for your service.” Last year a flag pole was installed in front of their house, and he proudly flew the American flag and the 11th Army Air Corp flag. The US flag is now at half mast in his honor. The Army Air Corps flag and his WWII Veteran hat are with him forever.

Morrie was preceded in death by his parents, Raymond and Elberta Hegg; his brother, Paul Hegg; and two of his children, Doug Hegg and Vicki Doyle. He is survived by his wife of 58 1/2 years, Dixie; his daughters, Sandy Butler, Wendy Anson and Jennifer Munson; brother Ed; ten grandchildren, great-grandchildren, nephews and nieces.

Rest in peace, we’ll see you in the resurrection